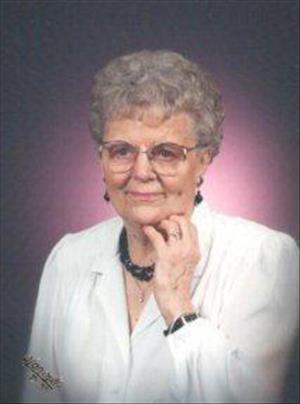 Mae Coleman, 95, of the Barrett Care Center, passed away at the Prairie Ridge Hospital in Elbow Lake on January 24, 2013. A memorial service for Mae Coleman will be held at 1:00 p.m., February 2, 2013, at the Erickson-Smith Funeral Home in Elbow Lake, with Pastor Tom Junkert and Chaplain Amy Noble officiating. Visitation will be from 5-7:00 p.m. on Friday, February 1st at the funeral home and one hour prior to the service. Mae was born on December 13, 1917, at Sanish, North Dakota, to Edwin and Sophie (Swenson) Evenson. She was baptized and confirmed in Sanish and attended the Sanish Public School. On March 19, 1938, Mae was united in marriage to Lee Coleman, after which they moved to Lee's farm south of Elbow Lake. They farmed together and Mae was also employed at the ASCS office in Elbow Lake from 1961 until her retirement in 1973. In retirement they enjoyed many summers at Lake of the Woods and then wintered in Arizona. Mae enjoyed traveling and had been to every state except Hawaii. Lee died on March 21, 1987. On September 3, 1990, Mae married Gordon Strom. They also traveled extensively. Gordon and Mae were able to have six years together before Gordon died in 1996. In 1996, Mae moved into Elbow Lake and in August of 2012 she moved into Barrett. Mae enjoyed playing cards, fishing and golfing. She was an active member of the First Presbyterian Church where she had served as an elder. Mae also belonged to the Eastern Star, the Elbow Lake Senior Citizens, the Auxiliary of the Elks Lodge, Habitat for Humanity, and she volunteered at the Salvation Army. She is survived by one son, John Coleman of Willow, Alaska; four grandchildren, Kimberly (Jody Bratsch) Coleman of Belgrade, Minnesota, Amy (Jim) Noble of Encino, California, Dr. Samantha (Scott Slaven) Coleman of Virginia Beach, Virginia, and Justin (Christina) Coleman of Winchester, Virginia; three great-grandchildren, Brette Noble, Sarah Noble and Kayla Coleman; three step great-grandchildren, Jessica Bratsch , Jeremiah (Jayme) Bratsch , Taylor Noble and special friend Rosita Sandoval; three step great-great grandchildren; and numerous relatives and friends.

Mae was preceded in death by her husbands, Lee Coleman and Gordon Strom; parents, Edward and Sophie Evenson; one son, Gary Coleman, and all of her brothers and a sister.

To order memorial trees or send flowers to the family in memory of Mae Coleman, please visit our flower store.