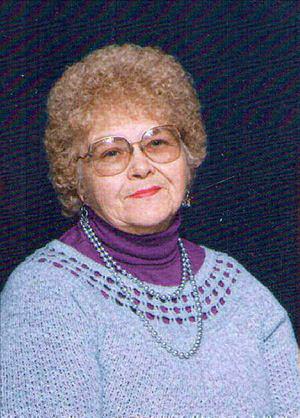 Mabel Pederson, 87, Barrett, died Monday, April 29, 2013, at the Prairie Ridge Hospital in Elbow Lake, with her family at her side. The funeral service for Mabel Pederson will be held at 11:00 am Thursday, May 2, 2013, at Peace Lutheran Church, Barrett, with the Rev. Matthew Rose officiating. Burial will be in the Peace Lutheran Cemetery, Barrett. Visitation will be held on Wednesday from 6-8 pm at Peace Lutheran Church in Barrett and will resume one hour prior to the service on Thursday. Mabel was born on December 5, 1925, in Stony Brook Township near Wendell, Minnesota, to Albert and Mendina (Folken) Asleson. She was baptized and confirmed at the Rock Prairie Lutheran Church and attended country school in Stony Brook Township. On December 22, 1943, Mabel was married to Orville W. Pederson in Dalton. The couple dairy farmed near Barrett until Orville's retirement in the early 1970's. Mabel was a cook for the Barrett Public School from 1963 to 1967, when she became the Head Dietician at the newly opened Barrett Care Center. Although she retired from kitchen duties in the mid-1990's, Mabel continued to volunteer at the Care Center where she played cards, read to the residents, spoke Norwegian with those who spoke the language, and helped write letters for those who didn't have the eyesight or ability to do so themselves. Mabel was an accomplished cook and baker and made all the traditional Norwegian favorites, including donuts and cookies for the grandchildren. She also enjoyed sewing, gardening, playing BINGO and cards. Mabel was a member of the Peace Lutheran Church. Survivors include her children Gerald (Pamela) Pederson of Moseley, Virginia, and Renee (Dwayne) Hanson of Brandon; grandchildren Andrew (Heather) Pederson, Jamie (Josh) Stump, Kari Burgess, Nathan Pederson, Angela Sitler, and Melissa (Kevin) Johnson; great-grandchildren Owen Pederson, Sophia and Isaiah Stump, Ruby Pederson, Cameron Sitler, and Eden and Vienna Johnson; and one sister, Luella Fagre Kosek of Barrett. She was preceded in death by her parents, her husband Orville (1990), daughter Shelley Burgess (2005), two brothers, Merton and Herbert Asleson, and one sister, Anna Karlstad.

Resumes one hour prior to the service.

To order memorial trees or send flowers to the family in memory of Mabel Pederson, please visit our flower store.