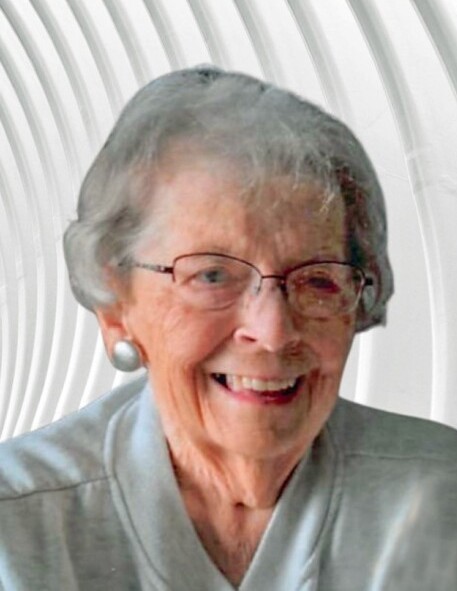 Lou Score, 93, of Kensington, MN, died on Monday, April 5, 2021, at Bethany on The Lake in Alexandria, under the care of Knute-Nelson Hospice.

Lou Ann was born on June 2, 1927, in Barrett, Minnesota, to Anton and Selma (Alvstad) Ronhovde. She grew up on the Alvstad family farm that was established in 1870.  Lou was baptized and confirmed into the Lutheran faith at Immanuel Church, Barrett, MN. She attended District 14 Country School through the eighth grade, graduating from Barrett High School in 1944. After school, Lou moved to Minneapolis and worked at Gopher Ordinance Works in the office. Lou moved back to Barrett where she worked as a bookkeeper at the Barrett Hardware Store and Elevator and also at the Barrett Bank.

On April 18, 1948, she married Palmer Score and the family made their home in Kensington. To this union came three children, Debbie, Pryce and David.  Lou worked at the First State Bank of Kensington from 1951 – 2007. She was inducted into the Minnesota Pioneer Banking Association in 1997. Palmer and Lou were Principal Owners of the First State Bank where Lou retired in 2007, after over 60 years of banking. Lou was a longtime member of the Kensington American Legion Auxiliary since 1958 and a member of the First Lutheran Church Women since 1948. Lou’s Faith was very important to her.

Her hobbies included antiques, reading, listening to Rush, watching birds, scrabble, playing cards, especially whist and 31. Lou enjoyed watching the Antique Road Show, Wheel of Fortune and Jeopardy. The family would always take a family vacation in July travelling around the country in their car hitting almost all the inland 48 states. Lou and Palmer loved to travel, including an around the world tour, trip to Hawaii, a yearly trip to Nevada going to Vegas and Tonopah Air Force Base where Palmer was stationed in the military and a trip to Norway with her sister-in-law, Ardis.  She was a great cook and baker. Lou’s family was always most important to her and she cherished the time she spent with them.

Lou would like to thank Dr. John Stock and his wonderful staff. They have been great in extending my life almost twenty years longer than I expected.

Walk Thru Visitation: Thursday, April 15, 2021, from 5-7 P.M., with a 6:30 Prayer Service at the Erickson-Smith Funeral Home in Hoffman, led by Pastor Irv Arnquist and continuing one hour prior to the service at the church.

Private Funeral Service: 11:00 A.M., Friday, April 16, 2021, a live stream of the service will be available on Lou’s obituary page at www.ericksonsmithfh.com.

Funeral arrangements are with the Erickson-Smith Funeral Home of Hoffman for Lou Score.

To order memorial trees or send flowers to the family in memory of Lou Score, please visit our flower store.