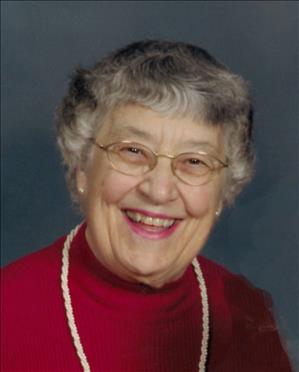 Lois D. Persons, 87, of Hoffman, MN, died on Monday, August 29, 2016, at the Barrett Care Center. Lois Darlene Schluns blessed the family of Harriet and Fred Schluns when she was born May 4, 1929 on a farm site near Fulton, Illinois. She joined the family of Earl, Walter, and Velma, (now all deceased). Later another girl, Lavonne, was added to the Schluns household. After attending several different schools in the Clinton, Iowa-Fulton, Ill area Lois graduated from Fulton High School. She found a job with Swift and Co. and worked there until her parents moved to the Clarissa area in Minnesota. She then transferred to the Swift and Co. business in Sauk Centre and worked there until she was married. Lois married Edgar Persons on July 11, 1953. An outdoor wedding with a whole herd of cows as witnesses started her and Ed off on their married journey which has lasted 63+ years. She began her married life as the school secretary at New Richland High School. When Ed was called to military duty, she moved back to her parent's farm and waited until she could accompany him to his new assignment. They moved first to El Paso, Texas where Steven was born and then to Fox Hill, Virginia where Gary entered the scene. Upon Ed's discharge, they made their home in Hoffman and ushered in two more children: Karla and Daniel. After a 32 year detour to St. Paul, they returned again to the Hoffman area and what is now the Rafter P Ranch. Other than her brief stint as a school secretary and later as an aid in the Commonwealth Nursing Home, Lois was a full time homemaker. It was a job she did extremely well, giving her time to focus on the things that helped the family grow. Lois was active in the St. Anthony Park United Methodist Church, especially in the women's groups. She was initiated into PEO, a women's fraternal society, and held office there several different years. Lois had her own private "Mission", taking care of elderly ladies in the neighborhood who needed some assistance, to the point of being appointed conservator of one neighbor who needed extra care. In Hoffman, Lois was active in the American Legion Auxiliary, Messiah women's group, WELCA, and an active Lions member, and for many years a volunteer at the Good Samaritan Society care facility as the primary provider of "Reminisce" each week. Lois is survived by her husband, Edgar of Kensington; children, Steven and son, Gus of Grand Marais, Gary and partner, Sharon of Santa Rosa, New Mexico and their children, Eli (Misty) of Monterey, CA and Nate of CA; Karla and son, Matthew of Hoffman, Daniel and wife, Kay of Hoffman and their children, Laura of Omaha, NE and Rachel(Brent) of Hoffman; great grandchildren, Charlotte, Benjamin, Zephryn, Zaelya and Zeena; a sister, Lavonne along with numerous nieces, nephews and a host of friends. Memorial Service: 11:00 A.M., Saturday, September 3, 2016, at Messiah Lutheran Church in Hoffman with a visitation one hour prior to the service. Clergy: Pastor Nathan Thompson Funeral arrangements are with the Erickson-Smith Funeral Home of Hoffman To order memorial trees or send flowers to the family in memory of Lois Persons, please visit our flower store.