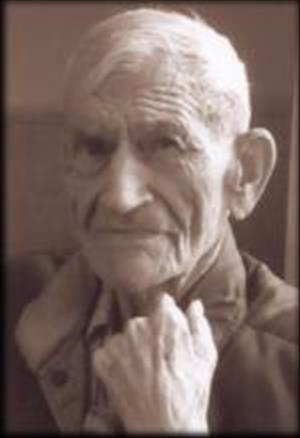 Lloyd Fredrick Volker was born on May 27, 1918, in Delaware Township, Grant County, Minnesota, the son of William and Zena (DeVries) Volker.

After his schooling, Lloyd worked for Ralph Sheets and various farmers milking cows. On March 27, 1941, at the age of 23, Lloyd enlisted in the United States Army, trained at Fort Meade, South Dakota, and was assigned to A Troop 4th Cavalry with horses. The name of dad's horse was, "Minnesota." Later on when the horses were replaced, they let them loose and they ran free. The outfit then became C Troop Mechanized. After his training, he left from New York on a ship called "Highland Chief" en route to England. This ship was a meat hauler, and the soldiers hung their hammocks from meat hangers. The trip took 21 days and there wasn't much to do except 'hang on'. Sometimes their dinner plates would slide away from them. Lloyd was stationed in England four to five months, maybe longer. His duties while there were to drive an armored car, and his rankings ranged from Private, Private First Class, and when discharged he held the rank of Sergeant.

While serving overseas, Lloyd was stationed in Normandy, Northern France, Rhineland, Ardennes and Central Europe. He received various medals: European, African, Middle Eastern Theatre Service, American Defense Service, and the Bronze Star. Lloyd left Europe in October 1945, departing from France or Belgium. It took him a week to return to New York from where he rode a train to Fort McCoy, Wisconsin, and was discharged from the military on October 31, 1945.

After military life, Lloyd attended Herman Agriculture School for Veterans. The Veterans were paid a certain amount of money for attending school one to two days a week for a six month period of time. He also worked for Jordahl Billboard Company with Ray Fabian putting up billboard signs and with Clarence Andrews and Everett Weiseman doing jobs such as painting and carpentry. Now we understand why he was so handy around the house and farm, always being able to 'fix' anything.

On December 17, 1946, he was united in marriage to Nancy (Ritzschke) Volker, and together they raised nine children. Lloyd and Nancy farmed east of Herman on the Jordahl farm from 1950-1966. In 1966, Lloyd purchased his own 160-acre farm and rented additional land. He "sold the cows" in 1974 and retired from farming in 1977. Lloyd still owns his farm today. In October 1985, Lloyd and Nancy retired and moved to Barrett Lake, where Lloyd resided until December 27th, when he went to live at the Johnson's Adult Care Home. Nancy passed away on October 18, 1992.

Memorials may be directed to Lakeland Hospice or the Herman American Legion.
To order memorial trees or send flowers to the family in memory of Lloyd Volker, please visit our flower store.