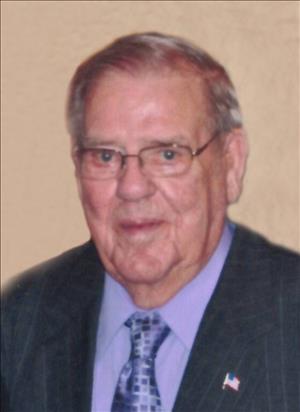 Lloyd Christopherson, 88, of Hoffman, died Monday, March 6, 2017, at Stevens Homes Plus, Barrett, MN. Lloyd Harris Christopherson was born on December 8, 1928 in Douglas County, MN on his parents home farm, the son of Cleve and Alice (Lundquist) Christopherson. He was baptized and confirmed in Lands Lutheran Church in Hoffman. In his younger years, Lloyd was involved in Boy Scouts and played croquet, baseball and basketball. Lloyd received his education in Hoffman, graduating from Hoffman High School in 1946. Following graduation, Lloyd enlisted into the U.S. Army at Fort Snelling, along with three of his classmates. Lloyd spent one year in Japan, celebrating his 18th birthday on the journey across the Pacific Ocean. He returned home in December of 1947 to help his father on the farm and spent his first summer custom combining from Texas to Minnesota. Lloyd spent six months in California with his brother Roy and worked for Allied Steel in Clinton, Iowa for a few years, most notably building all of the steel frame for the Mayo Clinic. Lloyd eventually returned to Hoffman to farm and drive school bus. In June of 1955, Lloyd married Muriel Olson, and they made their home on the family farm. In 1962, Lloyd worked in milk testing all across the state and in August of 1963, he went to work for Runestone Telephone Association as a lineman for 12 years, eventually taking the position of Central Office Equipment Operator. He held this position until retiring in 1991. Lloyd was extremely active in the community, most notably a Luther League Advisor, a member of Messiah Lutheran Church, where he served on the church council, finance committee, usher committee and sang in the choir for more than forty years. He was active with the Lands Lutheran Cemetery Association and in retirement, worked with the Erickson-Smith Funeral Home of Elbow Lake and Hoffman, assisting with funerals and visitations. Additionally, Lloyd was involved with the American Cancer Society, city council, Hoffman Fire Department, and the American Legion Post 393 of Hoffman. He was an avid fisherman, having taught all five of his girls how to fish on Elk Lake. Lloyd enjoyed woodworking, home improvement projects, assisted Muriel in creating quilts for all of their grandchildren, and was a great cook. Lloyd is survived by his daughters, Connie (Garb) Hohn of Benson, Charla (Wayne) Hagen of Spencer, WI, and Candyce De Noble of Hoffman, MN; a son-in-law, Brian Sylskar of Hoffman; 10 grandchildren, Christopher (Molly) Hohn, Chayla (Eric) Henry, Christal (Jake) Vogel, Justin (Emily) Hagen, Jenna (Jordan) Buss, John De Noble, Nicholas (Katie) De Noble, Sarah De Noble, Landon and Blair Sylskar; great-grandchildren, Theodore, Jackson, Lucina, Lydia, Dominic, Karson, Conley, Louis, Connor, Jenna, Andrew and Madison; a brother, Iver (Ina) Christopherson of Northfield, MN; four brothers-in-law, Harry (Marilyn), Harlan (Judy), Allen (Joyce), Vernal (Janet); three sisters-in-law, Carmen, Elaine, Jeanne (Gail); and many nieces and nephews. In addition to his parents, he was preceded in death by his wife, Muriel; daughters, Carol and Corlys; two brothers, Roy and Ralph; and brother-in-law, Dennis. In lieu of flowers, memorials are preferred to the local food shelf. Visitation: 5 – 7 PM Thursday, at Messiah Lutheran Church in Hoffman, and one hour prior to services at the church Funeral Service: 1 PM Friday, March 10, 2017, at Messiah Lutheran Church in Hoffman Clergy: Reverend Nathan Thompson Interment: Lands Cemetery, Hoffman, MN Arrangements by Erickson-Smith Funeral Home of Hoffman Online Guestbook: EricksonSmithFH.com Visitation will resume one hour prior to the services at the church.

To order memorial trees or send flowers to the family in memory of Lloyd Christopherson, please visit our flower store.