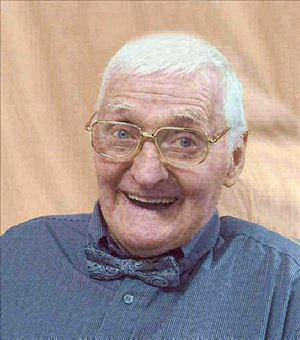 Levan Gilbertson, 84, formerly of Kensington, died Monday, October 17, 2011, at the Minnesota Veterans Home in Fergus Falls. Levan was born in Brooten, Minnesota, on January 28, 1927, to Louis and Mayme (Larson) Gilbertson. He grew up in Brooten and attended the Brooten Public School where he was involved in high school activities such as choir, football, basketball, and track. Following his graduation in 1945, Levan entered the US Army where he served with the Military Police Detatchment. On April 4, 1946, Levan was united in marriage to Delores E. Bethke at Minneapolis. Levan returned to complete his military service. Upon his honorable discharge on November 15, 1946, Levan and Delores made their home in Minneapolis. Levan attended Augsburg College for one semester when he was compelled to become a farmer. The family farmed near Brooten, Sunberg, Alexandria, and Glenwood before settling on a farm in the Kensington-Farwell area. Levan loved to farm and worked hard, as only one who milked cows daily could. He and Delores moved into Kensington in 2009, where Levan took advantage of the opportunities to visit with the folks in town. He was a member of the Kensington Legion Post 268 and the First Lutheran Church where he sang in the choir. He and Delores enjoyed dancing. Survivors include Delores, his wife of 65 years; his children, Lee Ann (James) Hagle of Detroit Lakes, David (Debbie) Gilbertson of Kensington, Nancy (Loren) Anderson of Colorado Springs, CO, and Lori (Jerome) Leonard of Kimball; 13 grandchildren, 19 great-grandchildren, and one great-great-grandchild. Levan was preceded in death by his parents and two brothers, Raynold and Allen Gilbertson. Funeral: 11:00 am Saturday, October 22, 2011, First Lutheran Church, Kensington Clergy: Rev. Kathryn Rothman Cemetery: First Lutheran Cemetery, Kensington. Visitation: 5-7 pm Friday at the Erickson-Smith Funeral Home in Hoffman; one hour before the service at the church on Saturday Military Rites: Kensington Legion Post 268

Visiation resumes one hour before the service on Saturday.

Visitation one hour before the service at church.

To order memorial trees or send flowers to the family in memory of Levan Gilbertson, please visit our flower store.