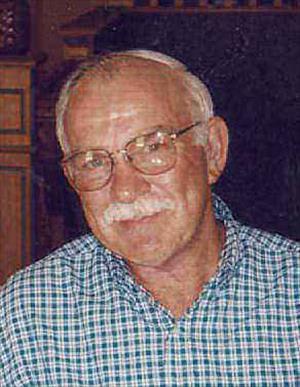 Les Vipond, 76, Elbow Lake, died Thursday, April 05, 2012, at the Evansville Care Campus. A memorial service for Les Vipond will be held at 1:00 pm on Monday, April 9, 2012, at Christ Lutheran Church in Elbow Lake with the Rev. Donald Wagner officiating. Burial will be in the Lakeside Cemetery, Herman. Visitation will be at the Erickson-Smith Funeral Home on Sunday from 4-7 pm, and will resume at the church on Monday one hour prior to the service. Lester Archie Vipond was born to Lester and Anna (Miller) Vipond in Herman, Minnesota, baptized and confirmed in the Bethlehem Lutheran Church in Herman, and graduated from the Herman High School in 1954. He enlisted in the US Army on March 16, 1955, and was stationed in Washington DC. He was honorably discharged on December 17, 1956 and returned home. Les enrolled at the North Dakota State School of Science where he was a starting member of the basketball team. He graduated from NDSSS in 1959 and returned home to Herman to work with his brothers. On August 14, 1959, Les was married to Ruth VanZomeren at the United Methodist Church in Herman. He and his family lived in Herman where he worked as a painter and finish worker with his brothers and as a postal clerk. In 1981, he was awarded the position of Post Master in Herman, a position he held until his semi-retirement in June 1992. Les was a long-time resident of Herman where he was active in many organizations including the American Legion, Herman Fire Department, Herman Development Corporation, Niemackl Park Board, and Free Cap apartment board. Les was also a member of the Bethlehem Lutheran Church in Herman and later became a member of Christ Lutheran Church in Elbow Lake. In 2001, Les and his brothers (and others) built his retirement home on Pomme de Terre Lake. He remained active in his shop working days and nights building furniture and specialty projects for his family members. His attention to detail and workmanship will be appreciated for many years to come. Les loved fishing, working in his shop, golfing, following the Minnesota Twins and Minnesota Gophers, and getting together with his brothers and their families. But one of Les's greatest joys was his grandchildren, making them furniture, attending their events, and just be "Grandpa" to them. Survivors include his wife Ruth; three children, Mike (Janet) of Fargo, ND, Rick (Kris) of Park City, UT, and Ann (Brian) of Elbow Lake; five grandchildren, Patrick, Jaime, Natalie, Victoria and Maclane; one brother, Dennis (Faye) and four sisters-in-law, Mary Anne (Stan), June (Dale), Jan (Richard) and Sharon (Robert). He was preceded in death by his parents Lester and Anna Vipond, his sister Mildred, and brothers Donald, Stanley, Dale, Kenneth, Richard and Robert.

To order memorial trees or send flowers to the family in memory of Les Vipond, please visit our flower store.