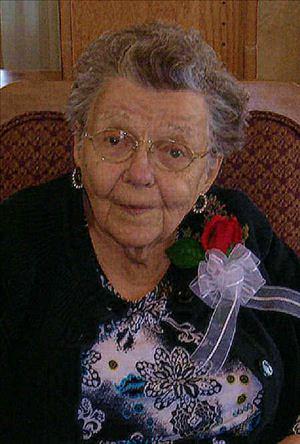 Lena Greeley, age 92, Fergus Falls, formerly Elbow Lake, died Sunday, March 11, 2012, at Pioneer Care in Fergus Falls. Funeral services for Lena Greeley will be held at 11:00 am on Thursday, March 15, 2012, at United Lutheran Church in Elbow Lake with the Rev. Bob Toso and the Rev. Jeffrey King officiating. Burial will be in the Lawrence Presbyterian Cemetery, rural Wendell. Friends may call at the Erickson-Smith Funeral Home in Elbow Lake on Wednesday, March 14, from 4-7 pm; visitation will resume at the church on Thursday one hour prior to the service. Lena was born on January 26, 1920, to George and Rosina (Gsell) Weigand of Wendell, the youngest of 13 children. She attended school through the 8th grade, but later finished high school in 1943 after seeing her class graduate. She graduated from the Minneapolis Business College in 1945. On May 19, 1946, Lena was married to Lyle Greeley and the couple moved to Minneapolis. There Lena worked for three years at the Firestone Tire and Rubber Company and for three years at the Quality Rug Company. To be closer to family, Lena and Lyle built a home and moved back to Elbow Lake; they later divorced. When she returned to Elbow Lake Lena worked for one year at the Grant County Hospital and then spent 25 years as a legal secretary for I. L. Swanson, the Grant County Attorney. She also served as secretary for St. John's Lutheran Church. After I.L. Swanson retired Lena was appointed the Grant County Clerk of Court in 1977. She served in that position until her retirement in 1986. In the 1950's and 1960's Lena was an active member of the Eastern Star, including service as Worthy Matron. She enjoyed purchasing estates and organizing auctions, along with collecting antique dishes and furniture. After retiring she spent much of her time playing bridge, volunteering at the Lake Region Hospital in Fergus Falls and crocheting. She crocheted beautiful doilies, Christmas tree ornaments, angels and dolls that she sold at craft fairs or made for custom orders. One of her angels won 1st place overall in the creative arts division of the Minnesota State Fair. Survivors include her daughters Teresa (Dr. Harold) Tarleton of Rancho Mirage, California and Susan (Rev. Jeffrey King) Greeley of Oak Park, Illinois; two sisters, Mary Fjosne and Clara Lysne, both of Fergus Falls; two grandchildren, Craig McKay and Michael (Alison) McKay; and six great-grandchildren, Devan McKay, Bailey, Brooklyn, Carter, Tate, and Emmett McKay. She was preceded in death by her parents and 10 siblings. Memorials are preferred to the United Lutheran Church, Elbow Lake, and Pioneer Care, Fergus Falls. Clergy: Rev. Bob Toso and Rev. Jeffrey King

Visitation continues at the church one hour before the service.

To order memorial trees or send flowers to the family in memory of Lena Greeley, please visit our flower store.