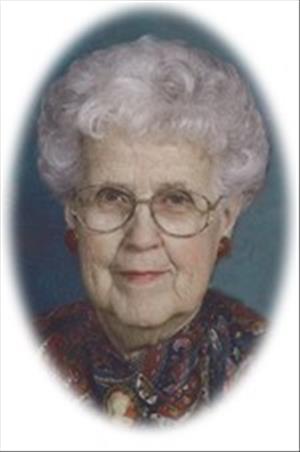 Leatrice Frikken, 87, of Elbow Lake, died Monday, March 29, 2010, at the Barrett Care Center. Funeral services for Leatrice Frikken will be held at 11:00 am on Thursday, April 1, 2010, at United Lutheran Church in Elbow Lake with the Rev. Bob Toso officiating. Burial will be in the Union Cemetery, Elbow Lake. Friends may call on Wednesday from 5-7 pm at the Erickson-Smith Funeral Home in Elbow Lake; visitation will resume at the church on Thursday one hour prior to the service.

Leatrice was born on July 26, 1922, to Byron and Marie (Calef) Gislason in Westerheim Township, Lyon County, Minnesota. She grew up in the Norcross area where she attended various country schools and graduated from the Elbow Lake High School. Following graduation, she worked at the Bank of Elbow Lake (now Eagle Bank) for five years. On April 17, 1945, Leatrice was united in marriage to Edward Frikken, and the couple farmed in Pomme de Terre Township. In 1964, they moved into Elbow Lake where Leatrice worked at the Grant County Herald for five years. She then worked for the U. S. Postal Service in Elbow Lake until retiring in February, 1986. She was a member of the Hjerdahl Lutheran Church before becoming a member of United Lutheran Church. She was a member of the American Legion Auxiliary, Carl A. Hanson Post 321. She enjoyed bowling, spending time with the, "Chat More and Do Less Birthday Club," crocheting, spending time at Pomme de Terre and Ten Mile lakes with her family, and going for car rides. Survivors include her children Sandy (Lauren) Krause of Redwood Falls, Steve (Donna) Frikken of Tecumsah, Oklahoma, David (Kathy) Frikken of Dakota, and Joni (Arnie) Salzbrun of Sartell; nine grandchildren and 18 great-grandchildren; and one sister, Dorys Richards of Marshall. She was preceded in death by her parents, her husband Edward (September 24, 2007), brothers Byron Gislason Jr. and Eugene Gislason, and sisters Dorys Gislason and Mary Lou Gislason.
To order memorial trees or send flowers to the family in memory of Leatrice Frikken, please visit our flower store.