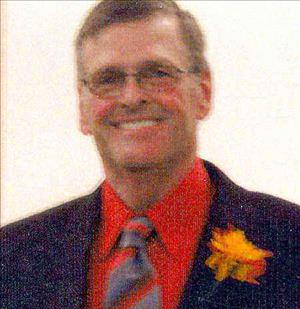 Layne Anderson, age 61, of Barrett, passed away Wednesday, March 14, 2012, at HealthEast St. Joseph's Hospital in St. Paul. Funeral: 11:00 am Monday, March 19, 2012, Zion Lutheran Church, Hoffman Clergy: Rev. Donald Wagner Burial: Erdahl Cemetery, rural Elbow Lake Visitation: Sunday from 2-5 pm; prayer service at 4:30 pm at the Funeral Home. Visitation will resume at the church on Monday one hour before the service. Layne John Anderson was born February 5, 1951, to Lawrence and Florence (Powers) Anderson at Alexandria, Minnesota. He was baptized in May of 1951 and confirmed in May of 1966 at Grace Free Church in Elbow Lake, Minnesota. Layne became a member of Zion Lutheran Church in Hoffman, Minnesota, by Adult Confirmation and Baptism in April of 2011. He graduated from Barrett High School in 1969 and attended the Alexandria Technical College for welding. Layne's first love was farming and restoring old tractors. He also worked at The Barrett Grain Elevator in Barrett and at Titan Machinery in Elbow Lake. In recent years, he returned to running the family farm. On June 14, 1975, Layne was united in marriage to Constance Johnson and to that union one son, Mark, was born. On October 1, 2011, he was united in marriage to Deborah (Mahlke) Miles. Layne passed away Wednesday, March 14, 2012, at the St. Joseph's Hospital in St. Paul, Minnesota. Layne is survived by his wife Deborah Anderson of Farwell, Minnesota; son Mark (Julie) Anderson and granddaughters Jaspin and Jaden of Sioux Falls, South Dakota; his mother Florence Anderson of Elbow Lake; sisters, Lynn (Gene) Jensen of Ashby, Minnesota, Geri Coyne of Wahpeton, North Dakota, and Genell (Bryan) Kyllo of Mantorville, Minnesota. Also surviving him are his step-children, Michelle Pieper of Phoenix, AZ, Tamara (Kelly) Horning of Zimmerman, MN, Aaron (Julia) Pieper of Phoenix, AZ, Christopher Pieper of Garfield, MN and Kayla (Andrew) Peterson of Fargo, ND; and eight step-granddaughters and one great-step-granddaughter. He is also survived by many nieces, nephews, aunts and uncles. He was preceded in death by his father, Lawrence Anderson, and his grandparents. Layne was a friend to all he met and was loved by everyone whom his life touched.

Prayer Service at 4:30. Visitation resumes at the church one hour prior.

To order memorial trees or send flowers to the family in memory of Layne Anderson, please visit our flower store.