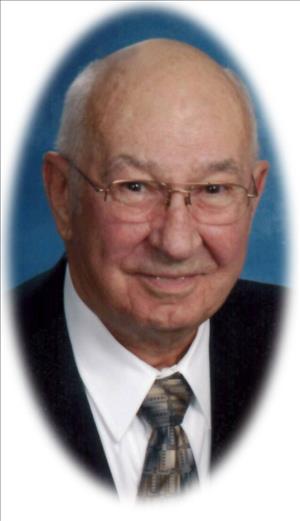 Lawrence Charles Kloos was born in Roseville Township, Grant County, Minnesota, on June 14, 1931, to Lawrence Clifford and Floris Alida (Pattison) Kloos. He was baptized and confirmed into the Lutheran Faith at the Fridhem Lutheran Church, Barrett, and received his first eight years of education at the Roseville Center Country School, District #20. Lawrence graduated from the Barrett High School in 1949 and began farming. On July 10, 1954, Lawrence married Collene Reddick at the Osakis Lutheran Church, and the couple made their home on the farm in Roseville Township. In addition to farming, Lawrence worked short term for the Runestone Electric Association. In 1956, he started flying airplanes, and on March 14, 1969, he earned his commercial license and began his aerial spraying business. Lawrence retired from farming in 1992, and in 1995, he and Collene moved to a home on Elk Lake. Shortly before Collene's death in 2011, they moved into Hoffman. Lawrence was a collector of guns and enjoyed shooting, hunting and fishing. He was a member of the Peace Lutheran Church in Barrett, a member of the Masonic Lodge – Alexandria for 60 years and joined the Shriners in 1969. Lawrence also was an active member of the Odd Fellows of Herman and the Eastern Star. Over the years, he served on several boards, including those of the Hoffman Co-op Grain, Grant County Fair, Runestone Electric Association, served two full terms on the Grant County Historical Society Board, and was Treasurer of the Grant County Committee of Aging. Lawrence passed away on Thursday, April 16, 2015 under the care of Hospice of Douglas County at the age of eighty-three years. He is survived by two sons, James (Cindy) of Hoffman, and Phillip (Julie) of Minnetonka; six grandchildren, Michael (Chrissy) of Robbinsdale, Corey (Jill) of Chula Vista, CA, Aaron (Crystal) of Hawley, Christopher (Claire) of Bloomington, Carson of Eden Prairie, and Laura of Minnetonka, and three step-grandchildren, Gerald Nelson of Austin, TX, Anna (Will Determan) Nelson of Minneapolis and Margaret (Doug) McGowan of Portland, OR; four great-grandsons, Morgun, Easton, Erik and Jackson, two great-granddaughters, Charlotte and Sydney; and two sisters, Mary Alice Hanson of Albuquerque, New Mexico, and Floris Ann Dawson of Ancaster, Ontario, Canada. Lawrence was preceded in death by his parents, his wife Collene, one sister, Patricia Shogren, and two brothers-in-law, Lesley Shogren and Homer "Jim" Hanson. Visitation: 4PM - 6PM, Sunday, April 19 at Peace Lutheran Church with a Masonic Service at 5:45PM Funeral: 1:00PM, Monday, April 20, 2015, at Peace Lutheran Church, Barrett Clergy: Pastor Matthew Rose Interment: Lakeside Cemetery, Herman, MN Condolences: www.ericksonsmithfh.com With Masonic Service at 5:45PM.

To order memorial trees or send flowers to the family in memory of Lawrence Kloos, please visit our flower store.