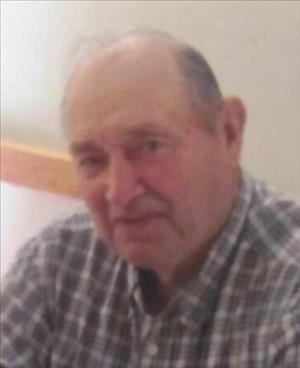 Kenneth Louis Anderson was born December 6, 1937 in Heron Lake, MN, to parents Louis Rudolph Anderson and Mabel Mae Schaeffer Anderson. He attended country school near Cyrus, MN and continued his education in Starbuck, MN. After school, he did custom combining in the southern United States, while still farming with his dad. He also worked at Hancock Concrete in Hancock, MN, for 10 years and was a member of the National Guard. Ken met the love of his life, Judith Zavadil, in 1959, and they married in 1961. They moved to their current home and farm in 1965, where he continued farming up until recently. Ken served the surrounding communities as a Solem Town Board member for 35 years, as well as a Hoffman Co-Op Oil Board member. He loved farming, which he did for over 55 years, fishing, gardening, visits to the casino and playing cards. At the Anderson household, there was always time for a game of cards and a friendly bet. Ken especially loved spending time with his kids, grandkids and great-grandkids, who all affectionately knew him as "Fred." In the later years of his life, Ken and Judy spent some time traveling, including yearly trips to Laughlin, Nevada, where he enjoyed playing poker and visiting the Oatman donkeys. Ken passed away at his home on the morning of October 27, 2014. He is preceded in death by his parents. Ken is survived by his wife, Judy; brother Darrell (Darlene) Anderson; sister Donna (Richard) Anderson; daughter Tammy Young (Brad); sons Byron, Scott (Shelly) and Joey (Sylvia); grandchildren Amanda (Sean), Patrick (Ashley), Paul, Brienna, Margo and Colin; and great-grandchildren, Ryan and Morgan. Visitation: One hour prior to the service at the church Funeral Service: 4:00 PM, Thursday, October 30, 2014 at First Lutheran Church, Kensington, MN Clergy: Rev. Kathryn Rothman and Chaplin Andrea Olson Interment: Wennersborg Cemetery, rural Kensington Arrangements: Erickson-Smith Funeral Home of Hoffman Condolences: EricksonSmithFH.com

One hour prior to the service.

To order memorial trees or send flowers to the family in memory of Kenneth Anderson, please visit our flower store.