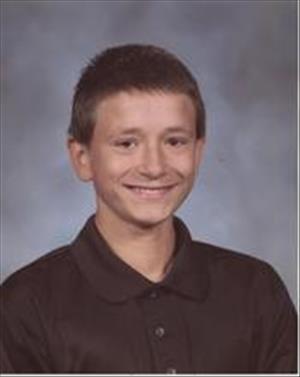 Joshua Cunningham, 13, Dalton, died Saturday, April 2, 2011, at Sanford Health in Fargo, ND. The funeral service for Joshua Cunningham will be held at 11:00 am on Friday, April 8, 2011, at Peace Lutheran Church in Ashby with the Rev. Carol Olson officiating. Burial will be in the Erdahl Lutheran Cemetery, rural Elbow Lake. Visitation will be held from 5-8 pm on Thursday, April 7, at the WCA North Elementary School gymnasium in Elbow Lake and will resume at the church one hour before the service on Friday. Joshua Dennis Cunningham was born October 1, 1997, in Pskov, Russia, was adopted by Tim and Sandy Cunningham on February 26, 2000, and spent the rest of his life calling Dalton, Minnesota, his home. Josh was truly a miracle - a strong, polite, handsome young man with a radiant personality and incredible musical talents. He played the guitar, trumpet and, recently, the tuba. He enjoyed singing, dancing and listening to music; acting; traveling, spending time with family and friends and summer days at the lake. Josh attended the West Central Area Schools where he participated in band, choir, football, wrestling, and baseball. He will be remembered by classmates and faculty for his outgoing nature, cowboy boots, and a swagger down the hallways that only Josh could pull off. With his gift of gab and eyes brightly shining he could sweet talk you into trying just about anything. Josh was an important member of the Peace Lutheran Church family. He was recognized as a promising Christian leader, always bringing brightness and joy to church gatherings. Josh had an amazing voice that some described as A�A�A½angelic.A�A�A½ When people heard him sing, they were often struck by the incredible depth of feeling and talent he shared with them all. Anyone who met Josh did not soon forget him, and he certainly never forgot themA�A�A½or their name. So warm-hearted, funny and charming, with a smile that could light up the room A�A�A½ you never walked away from spending time with Josh not feeling good about yourself. From your first meeting, you knew he was special. He was one of those unique people that made the world a better place. JoshA�A�A½s beauty and strength have had an enormous impact on all those so lucky to know and love him. The Lord puts everyone on earth for a reason, and while with us, Josh poured out the many blessings given him. By letting his light shine, he blessed our lives and left a song in our heart. Josh is survived by his parents Sandy and Tim Cunningham and his brother Zachary Cunningham; grandparents Mary Cunningham, Kathy and Bill Cunningham, and Harlan and Karen Nelson; 11 cousins: Andrea and Derek; Devin, Ryley and Teagan; Jackson and Katie; Benett; Celi, Easton and Traeton; ten aunts and uncles; and so many others who loved him dearly. He was preceded in death by his grandfather Cliff Letty. In lieu of flowers, memorials are preferred to the Joshua Cunningham Memorial Fund.

To order memorial trees or send flowers to the family in memory of Joshua Cunningham, please visit our flower store.