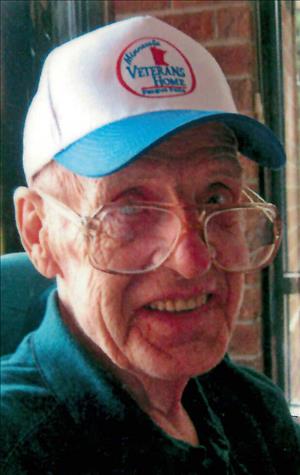 John Oberg passed away on Saturday, December 13, 2014 at the MN Veteran's Home in Fergus Falls at the age of eighty years old. John Sigfred Oberg was born in Bismarck, ND on September 30, 1934 to Anton & Cornellia (Erickson) Oberg. John received his schooling in Minnesota and worked on the family farm. He was drafted into the U.S. Army on January 18, 1956 and was stationed overseas in Korea. He was honorably discharged on December 17, 1957. On May 16, 1957, he was united in marriage to Barbara Anderson at the Barrett parsonage. The couple made their home in Alexandria where John hauled milk, worked at the lumber yard and shoveled coal from train cars. He also continued doing farm work throughout. Barbara passed away on August 5, 1997. John became a resident of the MN Veteran's Home in Fergus Falls in September of 2012. John enjoyed attending auction sales, hunting, fishing and visiting with people over a cup of coffee. He enjoyed tending his flowers and spending time with his grandchildren. John is survived by his children, Caroline (Carl Pipo) Reynolds of Brandon, David Oberg of Alexandria, Kevin (Lori) Oberg of Barrett, Mary Arneson of Herman, Jody (Brent) Engler of Barrett; Brother, Harry Oberg of Alexandria and eight grandchildren. He is preceded in death by his parents, Anton & Cornellia; his wife, Barbara; three brothers, Andrew, Edwin and Gordon; and one sister, Martha Hood. Visitation: One hour prior to the service at the church Funeral Service: 1:00PM, Monday, December 22 at Peace Lutheran Church, Barrett Clergy: Rev. Matthew Rose Interment: Erdahl Cemetery Military Honors: American Legion Post 351 Arrangements: Erickson-Smith Funeral Home of Elbow Lake Condolences: EricksonSmithFH.com

To order memorial trees or send flowers to the family in memory of John Oberg, please visit our flower store.