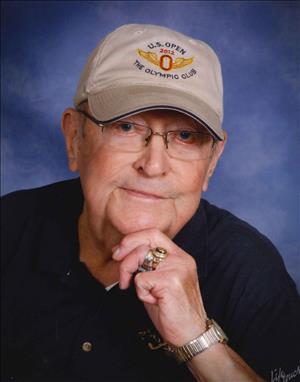 James Bernard McCarthy (Jim) was born July 6, 1930 in Highland Park, Michigan, the son of the late Patrick and the late Mary (Carr) McCarthy, and beloved husband of the late Jeanette (Shuck) McCarthy.

During Jim's travel for Excello Corporation, he met Jan Shuck. They married on September 22, 1962 and moved to Decatur, Illinois when Excello transferred Jim as their resident engineer.

In 1971, Jim and Jan moved to Elbow Lake where they had purchased the L-Bowl Lanes Bowling Center. The couple operated the bowling center for over 30 years, adding on McCarthy's Supper Club and Lounge in 1983.

Jim was a faithful member of St. Olaf Catholic Church in Elbow Lake, and a very active member of the American Legion Post 321 where he served as commander.

Jim had a love for golf. He was a lifelong member at Tipsinah Mounds Golf Course, and was a big part of the Men's league. He valued his time spent with his fellow golfers. He was the "Official Hole Spotter" for the member tournaments. When he wasn't playing golf, he would be watching it on television. Golf was Jim's life.

On Wednesday, November 19, Jim passed away at the St. Cloud Hospital at the age of eighty-four years.

And one hour prior to the service at the church.

To order memorial trees or send flowers to the family in memory of Jim McCarthy, please visit our flower store.