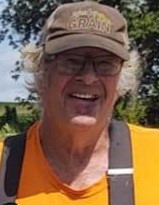 Jerry Norris, 72 of Hoffman, Minnesota passed away on Sunday, July 31, 2022 at the Evansville Care Campus in Evansville, Minnesota.

Jerry Gallen Norris was born on May 21, 1950, to Lawrence and Donna (Chamberlain) Norris in Algona, Iowa. After a time, the family moved to Grove Lake, Minnesota where Jerry would attend school at Glenwood and help his parents and siblings farm. Upon graduation, Jerry went into trucking, hauling flax straw and hay. He even went south, custom harvesting a few seasons where he made many lasting friendships and had some crazy adventures. One of Jerry’s favorite jobs was hauling livestock for Bruce Wagner out of Lowry, Minnesota. He would go on to drive for Paul Erickson hauling livestock during the late 1980’s and eventually go back on the road for himself and finally finished his 30 plus years of driving at Starbuck Iron.

Jerry was a step-dad to Tim, Scott and Lisa Zeien for a time, and unfortunately lost a daughter named Tweila days after her birth in 1982. Jerry eventually found the love of his life, meeting Terrance in 1985, and was blessed with his son Gallen Norris in 1988. Together, with Terrance and Gallen, Jerry would go on to farm, truck and begin a scrap metal recycling business. Even in his failing health, Jerry helped his son farm and haul scrap metal.

Jerry leaves behind his son, Gallen Norris of Hoffman, stepsons Tim and Scott Zeien, stepdaughter, Lisa Zeien, and brothers Wayne and Dale Norris. He will also be dearly missed by many nieces, nephews, in-laws, and the numerous friends he made during his journey.

He was preceded in death by his parents, Lawrence & Donna; his wife of 23 years Terrance; two step-children, Richard and Cindy; and two sisters, Sue Mitchell and Nancy Norris.

A Memorial Service will be held at 11:00 AM Tuesday, August 9, 2022 at the Erickson-Smith Funeral Home in Elbow Lake with visitation beginning at 10:00 AM.

To order memorial trees or send flowers to the family in memory of Jerry Norris, please visit our flower store.