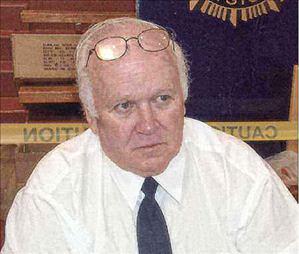 James Stanley Winter, 65, of Brandon, passed away on Saturday, October 13, 2012, at the St. Cloud Hospital as a result of a serious head injury that occurred on Friday evening. He was surrounded by loved ones at the time of his passing. He was born July 17, 1947, in Morris, Minnesota, to Stanley and Florence (Gades) Winter. He attended and graduated school in Hoffman in 1965. He attended NDSU and then enlisted in the Air Force where he served in Vietnam and received many medals, including the Purple Heart. Jim continued his service in the U. S. Army and was honorably discharged in 1975. In 1968, James married Linda Wood and the couple had two children, Laura and Lynnette. On December 4, 2004, James married Karla Dahle. James started working at a young age running heavy equipment for Rudy Link. He helped his parents on the Winter family farm outside of Hoffman. He was employed for Wanzek Construction of Fargo, ND, where he drove truck and operated heavy equipment for 22 years. In 2002, he owned and operated "The Other Guy's Place Too!" in Ashby. After getting out of the bar business, he and Karla moved to Ely, Nevada, where he was employed by Robinson Mining hauling copper concentrate until he took a job at the Barrick Gold Mine in Crescent Valley, Nevada, where he drove the worlds' largest haul-pac truck until becoming disabled in 2009. At that time, he moved back to Minnesota with his wife and granddaughter, Zoe Austin. They made their home in Brandon where he was currently helping Paul Jennen with the harvesting in Elbow Lake. James loved working outdoors and being close to water, especially if he was able to scuba dive, which he enjoyed the most of all. He also enjoyed traveling and collecting oil paintings done by Wyland. James loved to sing and share his beautiful voice with other in his songs. His grandchildren and great-grandchildren loved singing with their "papa." He taught Sunday school at Trinity Lutheran Church in Wendell and made sure his Sunday school students put everything they had into their songs. He sang for many weddings, baptisms, funerals, in church, and karaoke. He always found projects to do to keep busy around the house. He didn't like to sit still for a long period of time. He especially enjoyed the times where he could spend with his grandchildren and great-grandchildren. James is survived by his wife Karla of Brandon; daughters Lynnette (Jack) Reeves of Wahpeton, ND, and Heather Dahle of Ely, NV; grandchildren Amanda (Nicholas) Dahmes of Carlos, Ashley Williams of Alexandria, Andrew Steffens of Grand Rapids, James Reeves of Wahpeton, Zoe Austin of Brandon, and Aaryn Dahle of Ely, NV; great-grandchildren Thomas and Olivia Dahmes of Carlos. Other survivors include his brothers Scott (Nancy) Winter of Hoffman and Larry Winter of Hoffman, niece Jeanne (Bruce) Marts of Hoffman, nephews Chris (Carissa) Winter of Hoffman, Evan Dahle of St. Cloud and Jacob Dahle of Morris; great-nephews Christopher and Carson Winter of Hoffman; sisters-in-law Patricia Petermann of Breckenridge and Darlene Roberts of Hutchinson; brothers-in-law Douglas (Nan) Dahle, Wayne (Deb) Roberts of Battle Lake, Gregory (Deb) Roberts of Ottertail Lake and Steven (Pam) Roberts of Glencoe; and many more nieces and nephews. He was preceded in death by his parents Stanley and Florence Winter, daughter Laura Winter, one brother-in-law, Francis Roberts, and one sister-in-law, Donna Dahle. Memorial service: 11:00 am Friday, October 19, 2012 Church: Trinity Lutheran Church, Wendell Clergy: Dr. Eugene Boe Burial: Zion Lutheran Cemetery, Hoffman Visitation: 5-7 pm Thursday, October 18, at the Erickson-Smith Funeral Home in Hoffman; resumes at the church one hour before the service on Friday

Visitation will resume at the church one hour prior to the service.

To order memorial trees or send flowers to the family in memory of James Winter, please visit our flower store.