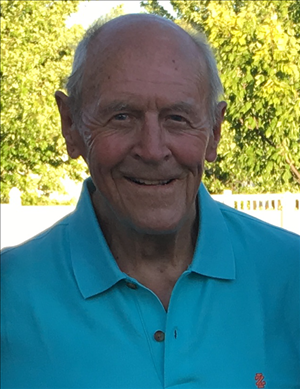 James "Jim" Loverne Haugen was born on a farm in Elbow Lake Township, Grant County, Minnesota, on March 29, 1931, to Joseph and Elizabeth (Johnson) Haugen. In 1935, the family moved to operate a farm owned by Joseph's brother near Ames, Iowa. Jim went to school there grades 1 through 7. When Jim's grandmother died ten years later (1945), his family purchased the home farm five miles west of Elbow Lake, and the family returned to Grant County where Jim grew up.

Jim was confirmed at St. John's Lutheran Church and graduated from Elbow Lake High School in 1948, where he was active in band, choir and sports. Following high school, Jim worked at various jobs on the farm and construction in the area. Jim enlisted in the Army Reserve, completed basic training and attended monthly meetings.

On November 29, 1953, Jim married Joyce Rindahl of Underwood, Minnesota. In 1954, the couple wintered in California where Jim worked at Rohr Aircraft. The following spring, they returned to Minnesota and Jim went on active duty serving one and a half years in Korea. Their first child was born while he was on a ship in route to Korea.

Upon coming home from Korea, Jim attended NDSU for three years on the G.I. bill. In 1960 he came back to the home farm and dairy operation, living in a mobile home on the farm. Later, Jim was able to buy his uncle's farm across the road from the "home place" moving the dairy operation with him.

Jim served on the Elbow Lake Farmers Co-op Oil board for 17 years, was secretary on the Wendell Creamery board for six years until it closed, served as Supervisor on the Elbow Lake Township board, and held various positions on the West Elbow Lake Church council. Jim was a member of the Elbow Lake American Legion Post 321. He enjoyed snow skiing and worked as a lift operator at Andes Tower Hills for 13 winters.

Being the innovator that he was, Jim has had a wind generator for 25 years and more recently, a (tracker) solar panel to produce electricity. He enjoyed motorcycling since 1948. Jim also enjoyed travel; after he sold his dairy operation he took numerous trips within the US and to other countries.

Jim was preceded in death by his wife, Joyce; son John (who died at birth); daughters, Elizabeth and Kristen; his parents; and his brother, Donald Haugen.

Visitation: 5 - 7 PM Friday, at Erickson-Smith Funeral Home in Elbow Lake, and one hour prior to services at the church. To order memorial trees or send flowers to the family in memory of James Haugen, please visit our flower store.