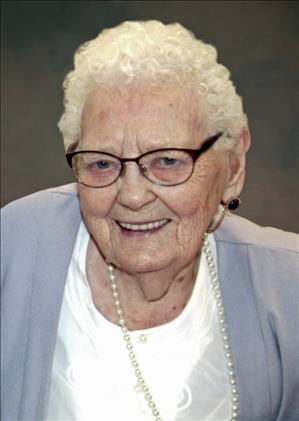 Irene Lindgren, 95 of Hoffman passed away, Thursday, July 16, 2015, at the Browns Valley Health Center, after a heart attack. She was very well cared for by wonderful nurses and her granddaughter Julie who works there. Irene Hattie Lindgren was born on December 11, 1919, on a farm in Carlos Township, near Alexandria, Minnesota, the daughter of Everett and Hattie (Kingston) Drum. She attended Country School in Carlos Township. The building is now located at the Douglas Country Fair Grounds. Irene worked for a few years in Alexandria, Minneapolis and Chicago. Irene and Oscar Lindgren were united in marriage on September 20, 1941 in Glenwood, Minnesota. After their marriage they farmed by Lobster Lake and then by Osakis. In 1946, they joined Irene's brother, Ralph in a plumbing business in Hoffman for a short time before Irene and Oscar took it over. Irene was the bookkeeper, ran the shop along with doing many other duties. They retired in 1983, wintering in Arizona and spending summers at their home on Elk Lake. In 1999 they moved into Hoffman to their apartment on main street, being able to live there until 2012. She enjoyed fishing, bowling, playing cards, dancing and traveling—the highlight being trips to Sweden and Germany. Irene enjoyed her family and especially her grandchildren, and Great grandchildren. Christmas was enjoyed at her home, and summer memories were made at their Elk Lake cabin. She is survived by three daughters, Marlene (Ronald) Sanasack of Dumont, Gloria (Michael) Young of Alexandria and Phyllis Canfield of Spokane, WA.; eight grandchildren; nineteen great-grandchildren; four great-great grandchildren; sister, Grace (J.R.) Hohnholt of Denver, CO.; brother, Donald Drum of Alexandria; and by numerous relatives and friends. Irene was preceded in death by her parents, Everett and Hattie Drum; husband, Oscar on September 19, 2014; two grandchildren, Mark and John Sanasack; three brothers, Harold, Walter and Ralph Drum; and by one sister, Dorothy Iverson. Funeral Service: 2:00 pm, Sunday, July 19, 2015 at Messiah Lutheran Church in Hoffman. Visitation: one hour prior to the service Clergy: Rev. Nathan Thompson Interment: Evergreen Cemetery in Alexandria Funeral Home: Erickson-Smith of Hoffman condolences: ericksonsmithfh.com

To order memorial trees or send flowers to the family in memory of Irene Lindgren, please visit our flower store.