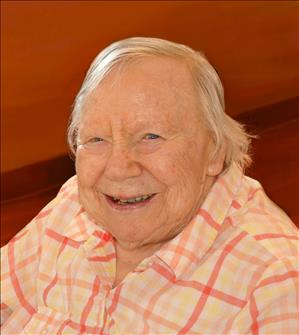 Irene J. Hansen, age 92, of Elbow Lake, passed away Monday, August 8, 2016 at the Barrett Care Center. Irene Josephine was born on June 10, 1924, at the Hansen farm in Elbow Lake Township of Grant County, MN, the sixth and last child of Henrik "Henry" Thorwald and Tillie (Burtness) Hansen of Norwegian heritage. She attended Pleasant Hill School District #10 and later played the clarinet in the band, and graduated from Elbow Lake High School in 1942. She then attended the Fergus Falls School of Business in 1943 and began working at the Elbow Lake Cooperative Creamery for five years as a bookkeeper. Irene then attended Concordia College until 1950. In 1950 Irene began working in the Business Office at the University of Minnesota's West Central School and Experiment Station (currently known as the West Central Research and Outreach Center) in Morris, MN. During her working years she maintained a residence on the family farm and also in Morris. In 1977 she purchased a home in Elbow Lake, which provided a home for her mother and sister as well as Irene after her retirement on June 30, 1986. West Elbow Lake Lutheran Church (WELLC) was an important part of her life. She was baptized by Reverend J.O. Dreng on June 29, 1924 during the Church's 50th Anniversary Celebration. In 1939, she was confirmed by Reverend Arthur W. Sorenson. Irene taught Sunday School for 13 years and served on the Church Council. She also attended, for a short time, St. John's Lutheran Church in Elbow Lake and sang in the choir. After ELLC merged with Bethlehem Lutheran Church in Elbow Lake in 2000, Irene spent several years as secretary. She was active as a member and treasurer for the WELLC Cemetery Committee. Irene became a member of Bethlehem/West Elbow Lake Lutheran Church when the two churches merged. Irene's hobbies included stamp and coin collecting, sewing, photography, gardening, Burtness genealogy, and reading several different newspapers. After retirement a computer and a greenhouse became "Irene's Playland". Her computer work included copying digital camera pictures and using a scanner, copying vinyl records to CD's and many interesting programs. She enjoyed raising plants in the greenhouse and keeping company with members in the Grant County Master Gardeners Club. For years, Irene traveled with her mother, Tillie, to family reunions, Hallinglag, and many other places in Minnesota and surrounding states. Irene also went to Norway, Greece, and Israel with friends. After Tillie passed over, Irene traveled very little, preferring to concentrate on visiting areas around Elbow Lake and Fergus Falls, and gardening with her brother, Thorwald. Irene was the last of her family; parents, Henry and Tillie, brothers, Philip, Raymond, David, Thor and their wives, and sister, Blanche all preceded her in death. Surviving Irene are a niece, Gail, and nephews, Jay and Ralph; along with several great, and great-great nieces and nephews, as well as a host of friends. Funeral Services: 2PM, Friday, August 12, 2016 at Bethlehem/West Elbow Lake Lutheran Church, with visitation one hour prior to the service. Clergy: Reverend Scott Ruud Interment: West Elbow Lake Cemetery Erickson-Smith Funeral Home of Elbow Lake is assisting with arrangements. To order memorial trees or send flowers to the family in memory of Irene Hansen, please visit our flower store.