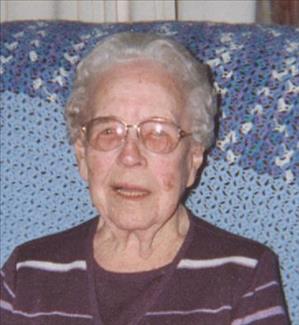 Inga G. Johnson, 100, Barrett, passed away Sunday, July 17, 2011, at the Barrett Care Center, Barrett, Minnesota. Inga was born April 15, 1911, to Nora (Nelson) and Eleseus Hagen at Underwood, Minnesota, and grew up on a farm north of Underwood. She was baptized and confirmed at the Aurdal Church and attended Fergus Falls High School, graduating in 1931. On June 20, 1934, Inga married James B. Johnson of Barrett, Minnesota. They resided on the family farm west of Barrett where they raised their five children. In 1970, they moved to a home in Barrett. James passed away at 95 years of age in September of 1996. Inga lived in that home until the age of 95, when she moved into the assisted living area of the Barrett Care Center. In 2008, she moved into the nursing home due to declining health. Inga was active in her women's group, LCW, at Immanuel Lutheran Church. She loved flowers and gardening and was known for her great cooking abilities. She always had extra food available since, "you never know who might stop by." She loved to sew and crochet and quilt. She assisted with the quilting group at the church well into her 90's. Inga enjoyed music and took piano lessons for one year. Most of the time she played by ear. The music she learned was polkas and waltzes, and she entertained her family often with her playing. She has passed her love of music to her grandchildren and great-grandchildren. Inga was a very kind and generous woman. Her family meant everything to her. She enjoyed visits and having a lot of people around. She enjoyed the celebration of her 100th birthday in April and often mentioned how many people came to the party and all the birthday cards she received. Inga was preceded in death by her parents Nora and Eleseus Hagen, her husband James B. Johnson, two brothers, Elmer and Melvin Hagen, two nephews, John and Duane Hagen, three nieces, Corrine Johnson, Ione Johnson, and Beverly Johnson, and all of her brothers and sisters-in-law. Inga is survived by five children: Joanne (David) White of Omaha, Nebraska, Norma (Terry) Petersen of Washburn, North Dakota, James (Sharolyn) Johnson of Barrett, Minnesota, Gloria (Harlow) Ostenvik of Watertown, South Dakota, and Vivian (William) Kranzler of Moorhead, Minnesota; 11 grandchildren, Brenda (Jeff) Appel, Lisa (Darren) Saner, Debra (Phillip) Romig, Stacy White, Karen White, Brent (Theresa) Petersen, Steve (Martha) Petersen, David (Rhonda) Johnson, Jane Johnson, Jonathan Kranzler, and Amy (Justin) Scoville; 15 great-grandchildren, Ben and Sam Romig, Justin, Mark and Drew Petersen, Ben, Reed and Elsie Petersen, Jimmy and Presley Johnson, Jeremy Appel, Melissa and Kyle Saner, and James and Michael Kliner; and many nieces and nephews. Funeral: 11:00 am Monday, July 25, 2011, Peace Lutheran Church, Barrett Clergy: Rev. Matthew Rose Burial: Immanuel Lutheran Church, Barrett Visitation: one hour before the service only at church

One hour before the service at church

To order memorial trees or send flowers to the family in memory of Inga Johnson, please visit our flower store.