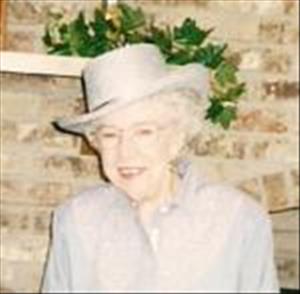 Inez Elaine (Hanson) Henry was born August 28, 1917, in Gary, Minnesota, to Helmer and Benora (Hermanson) Hanson. She graduated high school in 1936 from Mahnomen and then took an accounting course in Crookston, Minnesota, and worked as office manager for the Mahnomen Agricultural Adjustment Administration.

On December 23, 1942, Inez enlisted as an Apprentice Seaman in the US Navy where she spent two and a half years in the Navy Waves as a Communications Supervisor. During her service, Inez attended Hunter College in New York City, attended college at Miami University at Oxford, Ohio, for a year, spent 12 months at Livermore, California, and about 12 month at Jacksonville, Florida. She was honorably discharged on October 19, 1945, with the Rank of Telegrapher Second-Class.

On May 26, 1946, Inez was united in marriage to John Arlan Henry in Los Angeles, California. They moved to Bismarck, North Dakota, where John worked for the Ford Motor Company as a representative. In 1951, they moved to Mahnomen, Minnesota, where he was in partnership with his brother-in-law Elby Hanson in a Ford dealership. In 1955, the Henry's bought the Star Motor Co. Ford dealership in Elbow Lake, where Inez worked as the bookkeeper. She also worked as a bookkeeper for the Galaxy Supper Club in Barnesville. She took a teller position with the Washington Federal Bank in Elbow Lake where she worked until retirement in 1982.

Inez was preceded in death by her parents; her husband, John (March 13, 1999); her brother, Elby Hanson; and her sister, Evelyn Crow.

Visitation: 9:30 am to service time at church