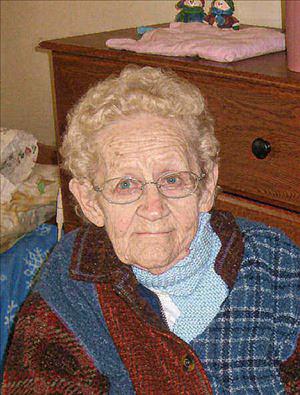 Henrietta "Hank" Anderson, 83, Barrett, died Saturday, September 8, 2012, at Prairie Ridge Hospital in Elbow Lake. Funeral services will be held at 11:00 am on Wednesday, September 12, 2012, at Lincoln Lutheran Church, rural Hoffman, with the Rev. Kathryn Rothman and Rev. Merilee Bergerson officiating. Burial will be in Lincoln Lutheran Cemetery. Visitation will be held at the Erickson-Smith Funeral Home in Elbow Lake on Tuesday from 5-7 pm, with a 6:30 prayer service, and will resume at the church one hour before the service on Wednesday. Henrietta was born in Dell Rapids, South Dakota, one of eight children born to Henry and Grace (Meinders) Poel. She attended school and graduated from high school in Trent, South Dakota, and later attended beauty school. On June 3, 1948, she was united in marriage to Harvey Anderson in Dell Rapids. The couple moved to Grant County where they farmed near Barrett for many years. In 1970, they moved into Barrett. Henrietta was a cook at the Barrett Public School; she also cooked at the Barrett Care Center for many years. Henrietta was active in her church where she taught Sunday school and was a member of the ladies aid, and she closely followed her children's school activities. She enjoyed her garden, flowers and yard work, but her best days were spent with her children and grandchildren. Survivors include children Diane (Roger) Rosby, Jerry Anderson, Vickie (Daryl) Bergerson, Larry (Debra) Anderson, Lorie Anderson (Terry Lee), Robin (Michael) Bonasera and Shari (Tim) McCluney; two sisters, Doris Harriman of Owatonna and Cora (Joe) Cook of Billings, Montana; 11 grandchildren: Sheila Fossan, Shane Rosby, Scott Anderson, Jeffrey Anderson, Michael Anderson, Edward Bonasera, Julie Wruck, Adam Fagre, Joseph Bonasera, Lane Wirtjes, and Aaron Fagre; and 23 great-grandchildren. Henrietta was preceded in death by her parents; her husband Harvey (1977); one son, Tyrone (1974); two grandsons, Jarid Anderson (1985) and Keith Fronning (1992); and daughter-in-law Barb Anderson (2011).

visitation one hour prior

To order memorial trees or send flowers to the family in memory of Henrietta Anderson, please visit our flower store.