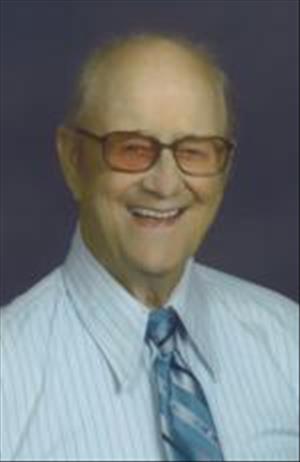 Harry Elwood Westberg, 87, Hoffman, died peacefully on Tuesday, June 22, 2010, with his daughters at his side in the Hennepin County Medical Center in Minneapolis following complications of a vertebral fracture.

Harry was born on the family farm in Land Township near Hoffman, Minnesota, on November 28, 1922, the son of Paul and Lydia (Johnson) Westberg. One of six children, he grew up on the farm where he learned the lessons of hard work, integrity, and perseverance which would serve him for the rest of his life.

Harry was baptized and confirmed in Bethel Lutheran Church in Hoffman. On September 21, 1946, he married Ellen Dahle. Together they spent their lives farming. They had two daughters, Karen born in 1947 and Cheryl born in 1950.

His love of farming kept him at it his entire life, including last fall's harvest. Harry enjoyed simple pleasures in life: spending time with family, puttering with farm equipment, and going to town for coffee. He especially loved spending time with his grandson, Andrew. As a husband, father, grandfather, and friend, he was a wonderful model in life. In the face of adversity, his determination and smile never waned. Now, in death, his lessons continue.

In February of this year, Harry lost Ellen, his loving wife of 64 years. Harry was also preceded in death by his parents; brothers, LeRoy and Orville; and sisters, Irene (Mel Anderson) and Luella (Art Stark).

Visitation: 5-7 Sunday, Erickson-Smith Funeral Home, Hoffman; one hour prior at church on Monday
To order memorial trees or send flowers to the family in memory of Harry Westberg, please visit our flower store.