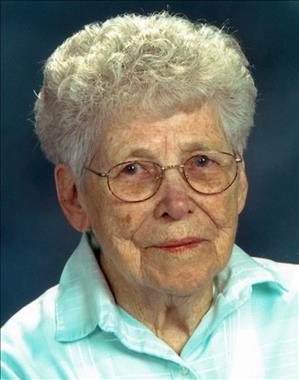 Harriett Rosengren, age 100 of Elbow Lake, passed away Sunday, November 29, 2015 at Stevens' Home Plus in Barrett. Harriett (Larson) Rosengren was born on March 9, 1915 in Grand Forks, ND to Clarence and Thea Larson. They moved to Detroit Lakes where she attended first grade. Harriett moved to Elbow Lake to live with her grandparents and graduated from the local school. She was employed at the Bank of Elbow Lake for many years. On June 30, 1940 she married Ray M. Rosengren of Hoffman, MN. Harriett was an outdoors person and joined her husband on fishing and hunting trips. They also enjoyed snowmobiling and ice fishing. Harriett was a member of the United Lutheran Church as well as the American Legion Auxiliary. She was preceded in death by her husband, Ray; parents, Clarence and Thea Larson; one brother, Ivan and her grandparents, Halvor and Isabel Hendricks. Survivors include one sister-in-law, Irene Swanson of Champlain, MN and one niece, Diane Kahan of South Australia. Funeral Services for Harriett will be at 3PM Thursday, December 3, 2015 at United Lutheran Church, Elbow Lake with Pastor Jean Ohman officiating. Friends may visit one hour prior to the service at the church. Interment at Bethel Lutheran Cemetery, Hoffman. Erickson-Smith Funeral Home of Elbow Lake is assisting with arrangements. To order memorial trees or send flowers to the family in memory of Harriett Rosengren, please visit our flower store.