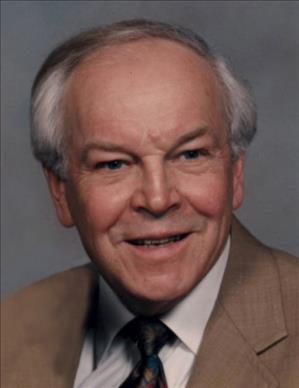 Harold Norris was born on March 14, 1929, in Fergus Falls, MN, the son of Lars and Nellie (Ellingson) Mohagen. He was baptized and confirmed at First Lutheran Church in Elbow Lake. Harold graduated from Elbow Lake High School before enlisting in the US Air Force where he proudly served four years before he was honorably discharged.

On August 27, 1955, he married Renee Johnson at Bethlehem Lutheran Church in Elbow Lake. The couple made their home in Northfield, while Harold attended St. Olaf College earning his Bachelors Degree. Harold and Renee returned to Elbow Lake in 1957, where he and his brother took over Mohagen's Hardware from their father, Lars. Harold ran Mohagen's Hardware from 1957 -1997. Harold was a past member of the Nationwide Legion, a member of the Elbow Lake Post 321 American Legion, and 1983 President of The Minnesota Dakota Retail Hardware Association. Church was always a very important part of Harold's life where he also taught Sunday School.

Harold enjoyed traveling with Renee to various destinations such as Norway and Europe, the Barbershop Quartet, and his time spent in the Elbow Lake Community.

He is preceded in death by his parents; wife, Renee and brother, Lorain.

Harold is survived by a sister-in-law, Laila Mohagen of Paynesville, MN and numerous nieces, nephews, cousins and a host of friends.

Funeral Service: 3:00 P.M., Tuesday, September 5, 2017, at Bethlehem West Elbow Lake with a visitation one hour prior to the service at the church. To order memorial trees or send flowers to the family in memory of Harold Mohagen, please visit our flower store.