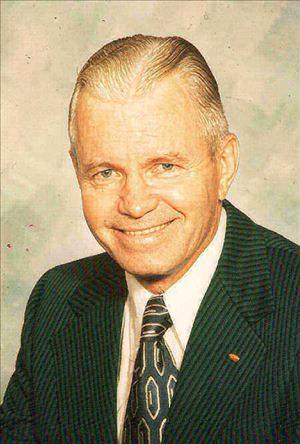 Harold Jacobson, 94, a resident of Hoffman, passed away on January 10, 2013, at the Good Samaritan Society - Hoffman after an extended illness and pneumonia under the care of Douglas County Hospice. Harold was born in Chicago, Illinois, on October 6, 1918, the first son of Martin and Pauline (Anderson) Jacobson. The family moved to Erdahl, Minnesota, Milwaukee, Oregon (1925), and Kensington, Minnesota (1933). In the late 1930's, Harold joined the Civilian Conservation Corp, serving with the Minnesota Forestry Service in Brimson, Marcell, Grand Rapids, Isabella and Wall Lake, near Fergus Falls. During the 1940's, Harold was employed by Kaiser Shipbuilding of Washington, Montana Ranchers and by the Caterpillar Corporation. Harold moved to Cedar Rapids, Iowa, and was employed by National Oats, Quaker Oats, Baron Motors, and worked seventeen years with the Crayovac Corporation, a division of W.R. Grace Corporation. Harold was united in marriage to Ella Vivian Hatter on September 28, 1958. Upon retiring in 1989, Harold and Ella moved to Kensington. Harold suffered a stroke in June of 2004 and was transferred from the Douglas County Hospital to the Hoffman Good Samaritan Center, where he has lived since. Harold is survived by his brother Bob (Joyce) Jacobson of Willmar, Minnesota; and three nieces, Gayle McMeekin, Judy Nelson and Kari Rechtzigel. He was preceded in death by his parents and his wife, Ella, who passed away on September 22, 1994. Memorial Service: 1:00 pm Saturday, February 2, 2013, Erickson-Smith Funeral Home, Hoffman Visitation: one hour prior Clergy: Chaplain Andrea Olson Interment: Pike Lake Cemetery, Kensington

To order memorial trees or send flowers to the family in memory of Harold Jacobson, please visit our flower store.