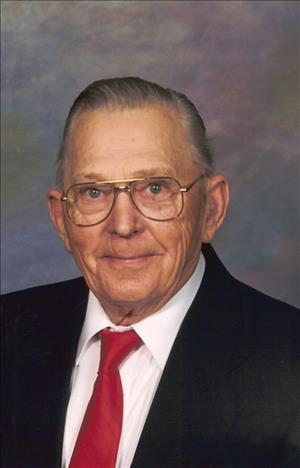 In the fall of 1950, Harlan was called into service of the Korean Conflict. After basic training in Fort Riley, Kansas, he returned home and, on Easter Sunday, March 25, 1951, he married Norma Larson of Underwood, Minnesota. Harlan spent the next 13 months in the 79th Engineer Battalion in Korea. Staff Sergeant Olson also spent six weeks in Japan at a demolition training school. He was honorably discharged from service at Camp McCoy, Wisconsin, in September, 1952. He attended Wahpeton Science School taking the electrical course. In the spring of 1953 he began working for Hiebert Electric in Windom, Minnesota. In 1956, they moved back to Barrett where they farmed a mile and half northwest of town and also did electrical work. In the 1970's, in addition to farming, he was employed at Aamot and Ellingson Implement in Elbow Lake. Later he worked again as an electrician and also did repair work at his own shop on the farm. Harlan and Norma retired from farming in 1990, and they moved to their home on the east side of Barrett Lake in 1992. Harlan and Norma had three daughters. Debra Lynn arrived in June of 1956. In November of 1960 Robyn Faye dared to make her appearance during deer hunting season. Six years later in February 1967, Jody Michelle arrived between snowstorms. Harlan enjoyed hunting, fishing, camping and snowmobiling. This past year at 85 years old he still went snowmobiling including trips of over 130 miles in one day. He enjoyed riding Sea Doo and even water-skied on his 75th birthday. He had fun attending stock car races. Harlan had a wonderful sense of humor and always made things fun. You could always count on Harlan for a good one liner and to end the conversation with a laugh. He was quick to come up with a nick name for many of his friends, young and old. Harlan had the ability to fix almost anything. If it was broken, it could be repaired and if parts weren't available he could probably figure out some way to way to make it work anyway! He is survived by Norma, his wife of sixty years; daughters Debbie (Pat) Hall of Minneapolis, Robyn (Rich) Snyder of Alexandria, and Jody (Chuck) Demaree of Moorhead; brother and sister-in-law, Dwaine and Annabelle Olson of Barrett; grandchildren Bethany Hall (fiancé Damian Uecker) of Portland, OR, Renee (Jesse) Johannesen of Des Moines, IA, Molly Jo Hall of Minneapolis, Sara (Josh) Serier of Champlin, and Jesse Snyder of Ham Lake; and great-grandchildren Emma Johannesen and Kaydence Serier. Other survivors include nieces Diane (Dick) Puchalski of Barrett, Kathy (Marc) Rosa of Atwater, and Brenda (Jeff) Swedberg of Fergus Falls, and many cousins and great-nieces and nephews. He is preceded in death by his parents, Oliver and Ruth, and his father and mother-in-law, Louis and Lottie Larson.

To order memorial trees or send flowers to the family in memory of Harlan Olson, please visit our flower store.