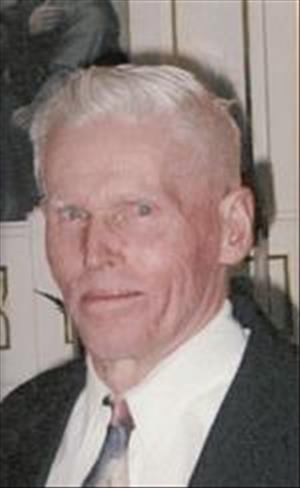 Gordon Larson, 85, Hoffman, left earth on the wings of angels on Friday, September 10, 2010, at the Knute Nelson Home in Alexandria from injuries relating to a farm accident. Funeral services for Gordon Larson will be held at 1:00 pm on Tuesday, September 14, 2010, at Messiah Lutheran Church, Hoffman, with the Rev. Steve Olson officiating. Burial will be in Land Cemetery, Hoffman. Visitation will be held Monday from 5-7 pm with a prayer service at 7 at the Erickson-Smith Funeral Home in Hoffman; visitation resumes at the church on Tuesday one hour before the service.

Gordon was born December 29, 1924, in Minneapolis, Minnesota, to his parents Gustav and Anna (Bjelland) Larson. When Gordon was five years old, his family moved to rural Land Township near Hoffman where he lived the rest of his life. He attended rural country school at District 41 until the 8th grade. He attended Hoffman high school, graduating in 1943.

After graduation, Gordon worked as a trucker with the Erie Truck Line of Hoffman. He later purchased his parents' farm near Hoffman and enjoyed 50 years of his passion in farming and cattle. In 1951, he married Louise Hall of Glenwood. Together they raised four daughters.

Gordon was active in community organizations, having served on church board of Bethel Lutheran church. He served as a supervisor for Land Township. With his family, he was a leader for the Happy Landers 4-H Club where he had been a charter member in his youth.

The Larson home was affectionately known as "Petticoat Farm." He chose Guernsey and Jersey dairy cows for his milking herd so that his daughters could enjoy the animals like he did. He even raised a few sheep for the daughters' 4-H projects.

Gordon maintained the favorite parts selection for the neighborhood young farmers. He was a skilled handyman who often helped out his neighbors to fix and repair broken machinery.

His love of tinkering was best shown in his collection of antique tractors and gas engines. He was a member of the Lake Region Pioneer Steam Threshers Association and loved sharing his "toys." The excitement was in finding the project and bringing it back to life.

After selling his livestock in 1984, Gordon and Louise visited Sweden and Norway, driving from coast to coast. They visited rural farms and metropolitan areas and often recalled their visits with the farmers they met off the beaten path.

Gordon was a man of strong beliefs and christian principles. He never farmed on Sunday. He did business on a handshake. He was at peace with his Lord.

Gordon is survived by his wife Louise, his daughters Patricia (Mike) Gloege, Julie (Terry) Mangnall, Jeanne (Mark) Roster, and Colleen (Monte) Quade; five grandsons, three granddaughters, and four great-grandchildren. He was preceded in death by his parents Gust and Anna Larson, and two grandchildren.
To order memorial trees or send flowers to the family in memory of Gordon Larson, please visit our flower store.