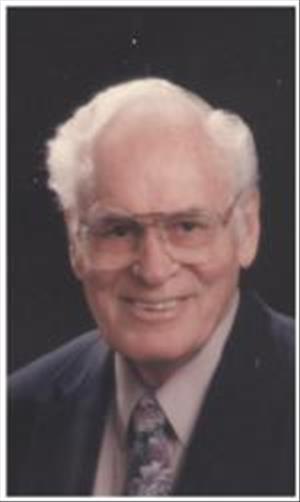 Visitation: 5-7 pm Tuesday at the Funeral Home; resumes one hour before the service at the church

He was born to Arthur and Blenda Gilbertson on October 14, 1925 in Erdahl Minnesota. Following his honorable service in the US Army during WW II, Glen married Lorraine Woessner on June 24, 1947 and lived in Elbow Lake until 1951 when they moved to Hoffman to manage the Farmer's Coop Elevator. Glen and Lorraine purchased the Hoffman Theatre in 1953 and operated it until 1958 when he opened a feed store and gas station. Later that year he purchased the Hoffman Grain Elevator, renamed it to Gilbertson Elevator and expanded and operated the business until 1964 when he sold it to Farmer's Co-op Elevator. Glen was always an innovative entrepreneur and throughout his inspiring career, he established numerous additional businesses in real estate, manufacturing, sales and marketing aerial photography and others.

Glen had an adventurous spirit and an insatiable curiosity of the world around him; he loved to travel, explore new cultures and exotic foods. His keen interest in aviation lead him to pursue a pilot's license and he enjoyed flying for both business and pleasure. He possessed a wonderful sense of humor but was also a compassionate individual and enjoyed relating with people of every background. He sincerely cared about others, oftentimes bringing home those who were down on their luck and provided them food and shelter and in finding work and an opportunity to improve their circumstances. He was a service-minded man who provided considerable time and resources to his church family and various community organizations over the years. Glen's deep and abiding faith sustained him through difficult times and was always a model of devotion for his family and others.

Glen was preceded in death by his parents, two brothers-in-law Jarvis Larsen of Elbow Lake, Hartvick "Shocky" Strand of Moorhead; and one grandson, Paul Gilbertson. He is survived by those he loved and who deeply love him: Lorraine, his wife of 63 years; four children Gary, Lynda, Bryan, and Annette; three sisters Evalyn Fitzsimmons, Helen Schumacher, and LouAnn Earsley; eight grandchildren and nine great-grandchildren.

The family of Glen Gilbertson wishes to gratefully acknowledge the kindnesses, support and prayers extended by all the friends and community throughout his eight year battle with cancer. We also sincerely appreciate the many kind expressions of compassion and sympathy during this time of loss.