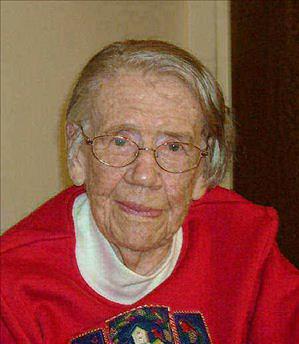 Gladys M. Shervey, 97, of Barrett, died Sunday, Dec. 23, 2012, at the Barrett Care Center. Gladys Marie (Ostenson) Shervey was born on October 17, 1915, at Barrett, Minnesota, to Austin T. and Olena (Thompson) Ostenson. She attended local schools and at the age of 15 graduated from Elbow Lake High School. Gladys earned her BA at Concordia College of Moorhead in 1935. She taught English and history at McGregor, North Dakota, from 1935-1937. Gladys then became principal/educator at Kensington High School. In 1939 she was united in marriage to Selmer Shervey of Barrett. Four children were added to the family: Paul, Robert, Ann and Kathryn. Gladys continued her teaching experience teaching high school social studies and later music at the elementary school in Barrett. Upon moving to Tacoma, Washington, in 1969 she worked at the Pierce County Library and was librarian at the PLU campus for 13 years. In 1986 she and Sam returned to Elbow Lake. Gladys has shared her musical talents most of her life, being church organist, accompanist for church and school events, many weddings and graduations, choir director and later years directed the volunteer group known as, "Senior Notes." While in the Barrett Care Center she still contributed by playing piano for various activities. She also was Sunday school teacher and 4-H leader. Sam and Gladys had a love for traveling and visiting relatives and friends. A trip was planned for almost every summer. She loved to garden, sew, play piano, read and listen to music. Gladys has crocheted and knit items for the family continually. Grateful for sharing in her life are her children Paul (Joi) Shervey of Portland, Oregon, Bob (Irene) Shervey of Barrett, Ann (Jack) Rose of Winner, South Dakota, and Kathy (Dennis) Guttromson of Omak, Washington; eleven grandchildren and seven great grandchildren; and many nieces and nephews. Preceding her death were her parents Lena and A. T. Ostenson, her husband Selmer, a brother Burton, half sister Cora Evangeline and half-brothers Clarence and Lawrence. Funeral Service: 11:00 am Thursday, January 3, 2013, United Lutheran Church, Elbow Lake Clergy: Rev. Bob Toso Burial: Peace Lutheran Cemetery, Barrett Visitation: One hour prior to the service

To order memorial trees or send flowers to the family in memory of Gladys Shervey, please visit our flower store.