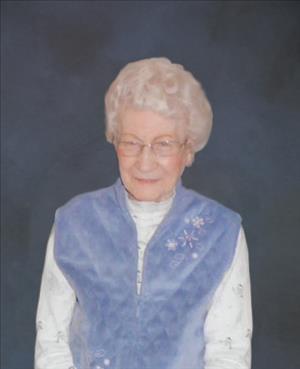 Gladys Evangeline Gerhardt, 96 of Alexandria passed away September 20, 2015 at Grand Arbor in Alexandria, MN. Gladys was born on July 5, 1919, to Alma and Ludwig Erickson in rural Barrett. The family moved to Hackensack, Minnesota, for several years during the 1920s where she began her public school education. After moving back to the area, she attended school and graduated from Evansville High School in 1939. She attended teacher training at Central School in Alexandria and began her teaching career. She married Edwin Rohloff in 1941 in Evansville. During World War II, she lived in Washington State and worked for Boeing Aircraft.

After moving back to the area, she taught in many area rural schools. Over the next 4 decades, Gladys was a school teacher in Wendell, Hoffman, Kensington, Underwood, and Barrett before her retirement. She is legendary for bringing many talented musical groups to the Jingle Bells Christmas telethon for the KCMT television station in Alexandria in the 1960s and 1970s.

Gladys was a gifted musician and readily shared her musical talent with family, church and community. She could hear a song once, and then play it on the piano, pitched in any key. In retirement years, she played the keyboard with her band, The Music Makers, until the age of 92.

Gladys was a very active leader in her church and community and received the Outstanding Senior Citizen Award from Grant County in 1992. She enjoyed travel and was able to visit most of the 50 states, and parts of Canada, Mexico, and Europe. She was preceded in death by her parents; brother, Kenneth; and husbands Edwin Rohloff and Donald Gehardt. Gladys is survived by her four daughters: LaVonna "Vonny" Rohloff of Roseville; Eileen and Paul Peterson of Waverly, MN; Colleen and Kent Marshall of Barrett; and Rhonda Hjelle, Alexandria. She is also survived by nine grandchildren; Christopher (Marie) Martin, Bradley (Britta) Martin, Careen (Jack Tomczak) Martin, Jesse (Jennilyn) Marshall, Julie (Mark) Anderson, Jamie (Mike) Goodrich, Judie Marshall, Lucas (Melissa) Hjelle, and Elisa Hjelle; and 14 great grandchildren. Gladys also leaves in-laws, cousins, nieces and nephews and numerous friends. Funeral Services will be 1PM, Wednesday, September 23, 2015 at Peace Lutheran Church, Barrett with Pastor Matthew Rose officiating. Visitation will be one hour prior to the service at the church. Interment will be at Zionsborg Cemetery, rural Evansville.

To order memorial trees or send flowers to the family in memory of Gladys Gerhardt, please visit our flower store.