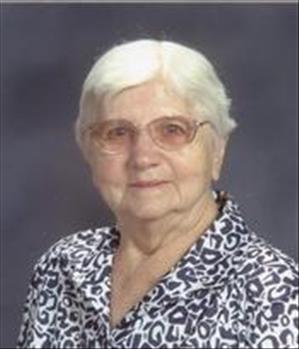 On February 5, 1945, she married Henry Pederson. They began their lives together on the farm north of Elbow Lake, raised three children, and were lifelong members of United Lutheran Church. She enjoyed gardening, baking, and attending church activities. She taught Sunday school and was a member of the ULCW, Circle, and Dorcas women's groups. She nurtured her children as they grew and took great pride in her grandchildren, showing interest in their active lives. She was a generous and loving person always putting others before herself. The strength of her faith was evident throughout her life.

When Henry retired from farming, they made their home on Pomme de Terre Lake. Later on, she enjoyed the companionship of her friends at Maplewood Manor in Elbow Lake and at Golden Manor in Fergus Falls.

She is survived by two daughters, one son, grandchildren, and great-grandchildren: Dr. Viann Pederson de CastaA�eda (Daniel), Antonio and Daniel; Ellen Holte (Reverend David), Lise and Peder; Harvey Pederson (Cyndi), Jeremy (Stephanie) and their daughters, Morgan and Rylee Haukos, Joseph and his son, Blayke Haukos, and Kristin and her sons, Waylon and Cole Ritttenour. She is also survived by several nieces and nephews in California and Minnesota.

She was preceded in death by her parents; her husband; her sisters, Gladys Wussow and Irene Wilson; and her brother Merrill Swenson.

Visitation: One hour prior to the service at the church.