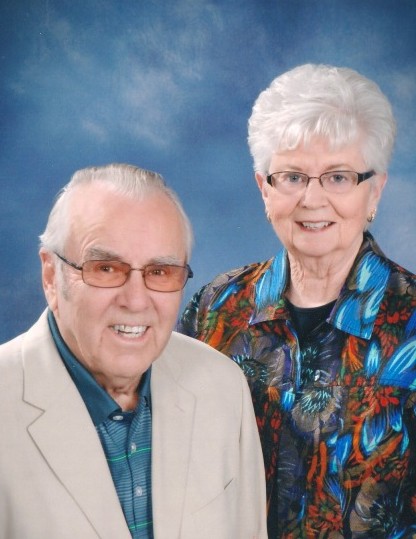 Marilynn Joan Larson passed away on December 8, 2020.  Marilynn was born on July 5, 1932, in Minneapolis, Minnesota the daughter of Joseph and Grace (Schoonover) Aanerud.   Gene El Roy Larson passed away on December 16, 2020.  Gene was born on March 6, 1930, in Fergus Falls, Minnesota the son of Roy and Gladys (Shelden) Larson.

On June 25, 1952, Marilynn and Gene were married in Elbow Lake. They resided in Lawrence Township where they were engaged in farming for eighteen years. In 1966, they moved to Elbow Lake and Marilynn was employed as an elementary school teacher in District #263 until retiring in 1992. Gene was employed by Elbow Lake Coop Grain where he worked for 26 years. He was elected and served as Mayor of Elbow Lake for 18 years. He continued to be the summer caretaker for Maplewood Apartments after his retirement. Gene & Marilynn resided in Elbow Lake during the summer months and Mesa, Arizona during the winter. A few years ago, they started living in Elbow Lake full time and most recently lived in the Assisted Living and Care Center in Barrett.

Marilynn and Gene were members of and attended Grace Free, First Presbyterian, Lawrence Presbyterian, and the Church of the Master and Apache Wells Community Church in Mesa, AZ. Marilynn was an elder, church officer, pianist, organist, choir member, bible study group participant, and treasurer. She was a member of the Elbow Lake Study Group, served on the Flekkefest Committee as treasurer, was a president of the Elbow Lake Education Association, and was an officer of the Tipsinah Mounds Ladies Golf League. Gene was an elder, officer, Bible study group participant, bus driver, and Sunday School Superintendent. He was involved with the Flekkefest Committee and Tipsinah Mounds Golf League.

They are survived by their four sons, Scott (Kris) of Benson, Sterling (Debbie) of Palmer, AK, Steve (Davia) of Portland, OR, and Stacy of Minneapolis; eight grandchildren, Zach (Jeanie) Larson, Katie Larson, Megan Larson, Heather (John) Haneline, Kara (John McSpadden) Larson, Connor Larson, Ben Larson, and Anna Larson; three great-grandchildren, David, Collin and Brodie Larson; her brother, Dean (Elvina) Aanerud of Pelican Rapids, his brother, Larry Larson of High Point, NC; and a host of friends. Marilynn was preceded in death by her parents, her half-sister, Jeanette Saulsberry, and her brother, Richard (Gloria) Aanerud. Gene was preceded in death by his wife, Marilynn, his parents, and an infant sister.

A Memorial Celebration of Marilynn and Gene’s Life will be at 3:00 PM Saturday, July 31, 2021, at Grace Evangelical Free Church in Elbow Lake with visitation one hour prior to the service. A Family Interment will be held earlier at Lawrence Presbyterian Cemetery, rural Wendell.

Erickson-Smith Funeral home of Elbow Lake is assisting the family with arrangements.

To order memorial trees or send flowers to the family in memory of Gene & Marilynn Larson, please visit our flower store.