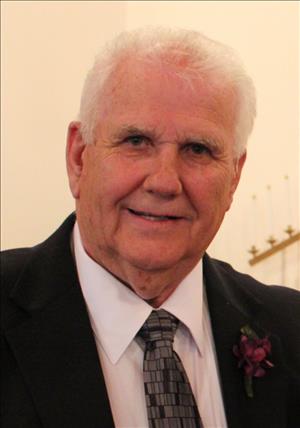 Gary Keith Peterson was the fifth and youngest child of Vincent and Elva (Bishop) Peterson, born on January 30, 1940. He was raised on the family farm in Elk Lake Township on the north side of Elk Lake outside of Hoffman MN. Gary was baptized and confirmed at Lincoln Lutheran Church, rural Hoffman. As a child he walked uphill both ways in knee deep snow to attend Country School District #1 and later graduated from Hoffman High School in 1958. Because of his faith commitment he met his soul mate at a Luther League gathering in Barrett. Ione C. Johnson (1943-2006) became Gary's wife on June 9, 1962. They made their home just down the road from his parent's farm and raised their three children. From a young age he was taught that hard work will get you far in life. And that is how he lived. Gary was an entrepreneur. He worked for Purity Milk Company after high school until the mid-60s. In May 1968, he purchased a Schweigert Meat distributorship and drove four days a week leaving Fridays open for his family. He talked often of the great people he met and stories and pranks on his days on "the route". In 1988, he and Ione purchased the Hoffman Lumber Company and years later was renamed Hoffman Building Systems. Gary sold the business and retired in July 2013. He established Elk Lake Heritage Preserve in 1995 on the same land he played the role of farmer years prior with small grains and cattle.

Gary enjoyed driving and his adventurous side took him and Ione to Alaska as well as many other states. As a young family they took numerous weekend camping trips each summer. He had a passion for the outdoors and seized every opportunity to hunt and fish. Gary had friends everywhere he went…or made them. He adored his family, especially his grandchildren. His laughter and love will be forever missed. Survivors include his children Angie (Les) Yanda of Alexandria, Paul (Lisa) Peterson of Hoffman, and Ronda Peterson of Moorhead. Grandchildren Andrew (Kayla) Peterson of Moorhead, Abby (Alan) Strom of Alexandria, Mallory Yanda, and Nickolas Yanda. Best friend and companion, Vonnie Brittin of Alexandria. Brothers Charles (Fran) Peterson, Roger (Mavis) Peterson, sister ViAnn Pearson, sister-in-law Carmen Peterson, and numerous nieces and nephews. He is preceded in death by his parents, wife Ione, brother Dennis Peterson, sister-in-law Ginger Peterson, brother-in-law Charles Pearson, sister-in-law Darlene Johnson, and brother-in-law Odell Johnson. Visitation: 5PM to 8PM Friday, May 6 at Messiah Lutheran Church, Hoffman Funeral: 2PM Saturday, May 7, 2016 at Messiah Lutheran Church, Hoffman Clergy: Reverend Nathan Thompson Interment: Bethel Lutheran Cemetery Arrangements: Erickson-Smith Funeral Home of Hoffman

To order memorial trees or send flowers to the family in memory of Gary Peterson, please visit our flower store.