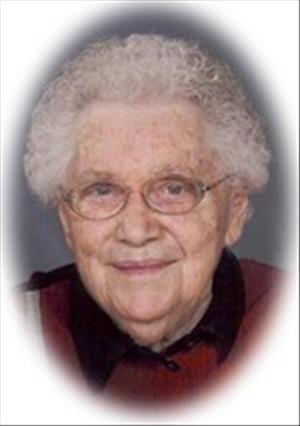 Fern (Mrs. Martin) Pasche, 90, Hoffman, died at her home on Saturday, October 3, 2009. Funeral services for Fern Pasche will be held 3:00 pm Friday, Oct. 9, 2009, at the Zion Lutheran Church in Hoffman with the Rev. Donald Wagner officiating. Burial will be in the Zion Lutheran Cemetery, Hoffman. Friends may call at the Erickson-Smith Funeral Home in Hoffman on Thursday from 5-7; visitation will resume at the church one hour prior to the service on Friday.

Fern was born on November 17, 1918, in Herman to William and Minnie (Podratz) McRoberts. She was baptized at the home of her aunt, Augusta Reimers, and confirmed at the Zion Lutheran Church in Morris by the Rev. F. E. Pasche. Fern graduated high school in 1936 from the Herman Public School. On October 3, 1943, Fern and Martin A. Pasche were married at the Bethlehem Lutheran Church in Herman by the Rev. F. E. Pasche. Following their marriage they lived in Waukegan, Illinois, while Martin was in the Navy. After his discharge, they returned to Hoffman and started dairy farming in Land Township. It was there they raised their children. Fern took great pride in her veal calf operation, getting top market for her veal sales. Her boys were hunters, and Fern processed any game they brought home. She was also a mom with great patience who taught her daughters how to sew. She enjoyed gardening, canning, reading, patchwork quilts, and writing. Throughout the years, Fern was involved in 4-H and an active member of the LWML at Church. She is survived by her husband of 66 years, Martin; children Anne (Edward) Eaton of Blaine, Paul (Vivian) Pasche of Harris, Sandy (James) Smith of Creston, BC, Canada, Bill (Peggy) Pasche of Hoffman, Julie (John) Boris of Mounds View, Daniel (Jeanette) Pasche of Starbuck, and Cherri (Doug) Bringgold of South St. Paul; 18 grandchildren and 16 great-grandchildren; and one brother, Walter (Carol) McRoberts of Herman. She was preced in death by her parents, brother Harold (Norma) McRoberts, son Martin (Marty), granddaughter Jill Pasche, and sister-in-law Muriel McRoberts.
To order memorial trees or send flowers to the family in memory of Fern Pasche, please visit our flower store.