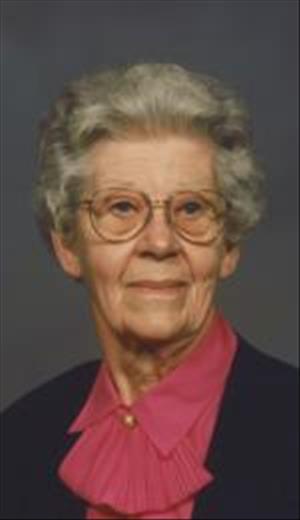 Evelyn was born on June 14, 1919, in Rock County, Minnesota, to Bernard and Freida (Bahr) Hansen. She grew up and received her education near Jasper, Minnesota. After she finished school, she worked for neighbors doing housekeeping and child care before moving to Minneapolis, where she worked in the same capacity for a doctor.

On October 6, 1940, Evelyn was united in marriage to Eugene Erickson in her parents' home near Jasper. The couple made their home in Barrett where they operated Erickson Truck Line. Evelyn worked as a nurse's aide and housekeeper at the Barrett Care Center for 20 plus years. She became a resident there in March 2004.

Evelyn enjoyed camping, traveling, Senior Citizens, and the Blessed Quilters of Peace Lutheran Church. After Eugene passed away, she was a good neighbor to her girlfriends, providing transportation to various events.

She was preceded in death by her parents, her husband, son Dennis, and a sister, Gladys Shirley.

Visitation: One hour prior to service at the church
To order memorial trees or send flowers to the family in memory of Evelyn Erickson, please visit our flower store.