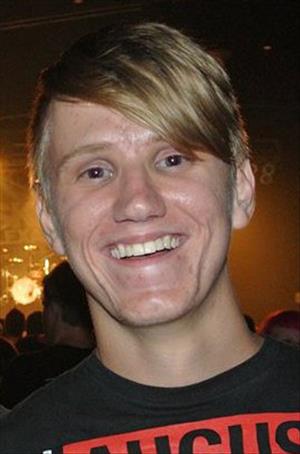 On the evening of October 12, 2014, Ethan Jay Rudell unexpectedly passed away at the University of Minnesota – Fairview Hospital in Minneapolis, MN, surrounded by his family and friends. Ethan was 22 years old.

Ethan was born December 2, 1991 in Alexandria, MN to Douglas and Wendy (Syrstad) Rudell. He was baptized and confirmed at Peace Lutheran Church in Barrett. He grew up as a country boy near Barrett and graduated from West Central Area High School in 2010. Ethan graduated from the Crop and Weed Science program at NDSU in May 2014. He was a star performer in the choir at West Central and a member of the Statesmen singing group at NDSU. He was also a member of the National Honor Society --- "Hi, my name is Ethan, and I drive a van!" He was an active performer in countless theater productions including one act plays in high school and the Prairie Wind Players.

Ethan came home to work with his father in his crop consulting business, Rudell Ag, in May. He helped in the family screen printing business, a huge addition to the Grant County Fair Board, and was the official t-shirt distributer at Ag Bash! He was a Charter Member of the Grant County Lions Club, and was an avid fisherman and loved to hunt. Music was very important to him and he was the first one to the mosh pit at concerts! Ethan will be remembered for his sunny, positive attitude, quick whit and ever present smile. He was able to talk Sponge Bob with a 4 year old and able to turn around and talk farming with a 90 year old. After speaking with Ethan, anyone involved in the conversation would know their day was made better. He touched so many lives, in such a positive way, during his short years here on earth.

"And sometimes the most beautiful pain in life – is the kind you can't disguise or hide. And the hard truth about life. If I'm not allowed to give up on mine, you are not allowed to not even try. ~Hold on Pain Ends, The Color Morale. Visitation: 4PM to 7PM Thursday, October 16, 2014 with Prayer Service at 6:45PM at Peace Lutheran Church, Barrett. Visitation will resume one hour prior to the service at the church Funeral Service: 11AM, Friday, October 17, 2014 at Peace Lutheran Church, Barrett Clergy: Pastor Matthew Rose Arrangements: Erickson-Smith Funeral Home of Elbow Lake Condolences: EricksonSmithFH.com

Prayer Service at 6:45PM at Peace Lutheran Church. Visitation will resume one hour prior to the service at the church.

To order memorial trees or send flowers to the family in memory of Ethan Rudell, please visit our flower store.