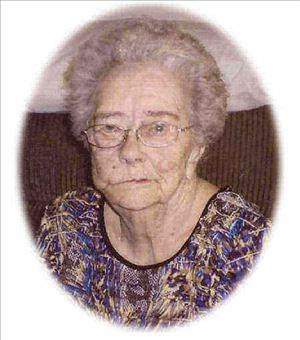 Esther M. Cline, 88, a resident of the Barrett Care Center, passed away Tuesday, October 30, 2012, at Prairie Ridge Hospital in Elbow Lake. Funeral services for Esther Cline will be held at 11:00 am on Saturday, November 3, 2012, United Lutheran Church, Elbow Lake, with the Rev. Bob Toso officiating. Burial will be in the Ness Cemetery, Elbow Lake. Visitation will be held from 5-7 pm on Friday, November 2, at the Erickson-Smith Funeral Home in Elbow Lake and will resume at the church one hour before the service at church. Esther was born July 23, 1924, on the family farm in Stony Brook Township northwest of Elbow Lake to Bert and Sigrid (Hoset) Bordson. Her family included six full siblings and three half siblings. She attended school at District 54, graduated from high school in Elbow Lake and continued her education at the Fergus Falls Teachers College where she received her teaching certificate. Esther taught in one-room school houses in Grant County and Otter Tail County. She married Arthur Achterberg on June 4, 1944, in Elbow Lake. The couple farmed and raised their three children, and Esther continued to teach for a period of time. The family moved into town where she held numerous jobs for various businesses in town including the O. K. Tire Store for Jim Nyquist where she was the bookkeeper, Pikop's Variety, the Elbow Lake Bakery, and again teaching school in Tumuli Township/Ten Mile Lake School for four years before retiring. Esther moved to Morris in 1970 where she provided child care for many area families until 1996. She married Kenneth Cline in January 1975 in Morris. Esther was an active member of the Sons of Norway Norskfodt Lodge in Morris and the VFW Auxiliary Post 5039. She moved to Donnelly in 2000 and was a member of St. John's Lutheran Church. Esther became a resident of the Barrett Care Center in 2011. She enjoyed playing bingo, gardening, trips to the casino in Hankinson, and loved to polka dance every Saturday night. She most enjoyed spending time with her family and grandchildren and great-grandchildren and looked forward to holiday gatherings where she made, "good green goop." Esther also had a collection of spoons. In 1976, Esther visited Norway with her sister Ruth and again in 2004, at age 80, with her daughters and a granddaughter. She was proud of her Norwegian heritage. Survivors include her daughters Bonnie (Maurice) Floden of Wendell and Jana (Danny) Bartness of Glyndon; five grandchildren, Shane (Patty) Floden, Brent (Jennifer) Floden, Travis (Kim) Bartness, Nathan (Jodi) Bartness and Danielle (Justin) Jones, 16 great-grandchildren (and one on the way), and one great-great-grandchild; and several nieces and nephews. She was preceded in death by her parents, nine siblings, and her daughter Judy Ann.

To order memorial trees or send flowers to the family in memory of Esther Cline, please visit our flower store.