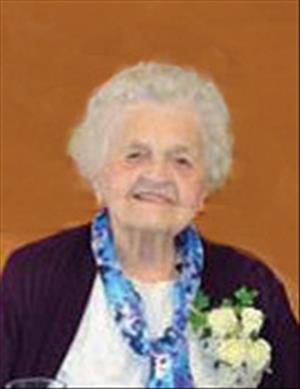 Ermal was born September 15, 1914, in Ortley, South Dakota, to Henry and Bessie Borchert. Her family moved to the Hoffman area in 1922. Ermal attended country school at Patchen District #16 in Roseville Township. She was baptized, attended Sunday school, and confirmed at Zion Lutheran Church, Hoffman.

Ermal was united in marriage to Tenney Nelson on April 9, 1933, by Reverend William Lohmann at the Zion Lutheran Church parsonage. They started farming and in 1939 moved onto the home place that had been homesteaded by Tenney's grandfather, Even Bjerke. They had two children, Wayne and Dorothy.

Ermal joined Lincoln Lutheran Church, rural Hoffman, after their marriage where she held offices and was active in Ladies Aid and various programs in the church. She was a charter member of the Elk Lake Homemakers Group and on a committee that published the Grant County Heritage Book.

Ermal and Tenney moved to Hoffman in 1979. They joined the Hoffman Senior Citizens Group where they did volunteer work.

Tenney died in 1996, and a year later, Ermal moved into a newly built apartment in Hoffman. After living in her apartment for twelve years, and reaching the age of 95 years, Ermal said, "I need a change." In 2009 she moved into the Assisted Living in Barrett and later moved into the Barrett Care Center. She enjoyed living there where the staff was so caring and wonderful, and she could socialize with many people.

Ermal enjoyed dancing, playing cards, fishing, traveling and socializing with family and friends. She was full of vim, vigor, and quick wit. Ermal always looked on the sunny side of life.

In lieu of flowers, the family prefers memorials to Lincoln Lutheran Church or Church Cemetery.

Visitation is one hour prior to the service.

To order memorial trees or send flowers to the family in memory of Ermal Nelson, please visit our flower store.