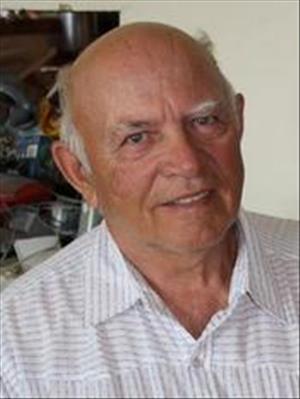 Emil H. Haack, 71, Hoffman, died Wednesday, April 6, 2011. Emil Harris Haack was born on May 10, 1939, near Hoffman, Minnesota, to Emil C. and Amanda (Kunze) Haack. He attended country school in Roseville Township. On February 10, 1962, Emil was married to Dolores C. Wieser and, following their marriage, the couple farmed in Roseville Township. In 1993, they moved to their present farm in Land Township. Emil was a lifetime farmer who loved the land on which he raised beef cattle and grain. Emil was proud to include his son Vern when he joined the farming operation. In addition to farming, Emil also worked during the ice harvest season in Barrett for a number of years and was a milk tester. Emil served on the Roseville Township board for many years. He enjoyed the socializing at the many auction sales he attended, playing cards, snowmobiling and four-wheeling, and having coffee at the café. He enjoyed his family, especially his grandchildren and great-grandchildren. He is survived by his children: Vernon (Carolee) Haack of Hoffman and Jill (Chuck) Vigilante of Pine River; his special friend Carol Henrichs of Hoffman; grandchildren Will Bratton, Rochelle (Dave) Isaacson, Steven Bratton, Stephanie Haack, Ethan Bratton, and Josh Bratton; great-grandchildren Caleb Isaacson, MaKena Haack, and Virginia Isaacson; one brother, David Haack of Hoffman; sisters Arlene Gulbrandson of Herman, Shirley Fiebelkorn of Kenosha, Wisconsin; sisters-in-law Jean Janisch of Thief River Falls, Marily Haack, Sandy Backman and Gwen Haack, all of Hoffman; brothers-in-law Rodney Wieser of Herman and Darrel Janisch of Thief River Falls; mother-in-law Phyllis Wieser of Herman; and many nieces, nephews and friends. Emil was preceded in death by his parents; his wife Dolores; and siblings Elmer Haack, James Haack, Lois Seeser, and Marian Rose. Funeral service: 10:00 am Monday, April 11, 2011, at St. Charles Catholic Church in Herman Clergy: Fr. Peter VanderWeyst Burial: St. Charles Catholic Cemetery, Herman Visitation: 1-4 pm on Sunday, April 10, 2011, at the Erickson-Smith Funeral Home in Hoffman and will resume at the church one hour before the service on Monday

To order memorial trees or send flowers to the family in memory of Emil Haack, please visit our flower store.