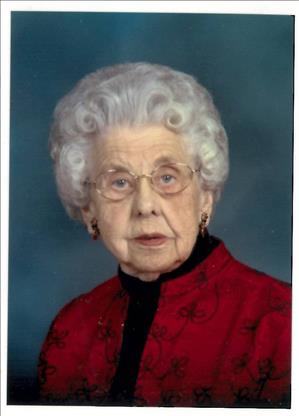 Elvina Nohre, 94, of rural Elbow Lake died Wednesday, August 26, 2015 at the Prairie Ridge Hospital in Elbow Lake. Elvina Genevieve Nohre was born on August 1, 1921, the oldest of eight children to Emil and Jennie (Ellingson) Olson. She was baptized and confirmed in the Erdahl Lutheran Church and attended Country School by rural Evansville.

On September 27, 1944, Elvina was united in marriage to Orville Nohre at the Ness Lutheran Parsonage. After their marriage they moved to the Nohre family farm in Elbow Lake Township. She was a homemaker and farmed with her husband. In 2005, the Nohre farm was recognized as a Century Farm. Elvina and Orville retired from farming on February 28, 1987, and continued living on the farm.

Elvina was a member of First Lutheran Church, then United Lutheran Church, and was active with Ladies Aid, Dorcus with quilting, and with Orville helped out in the church tribes. She was a charter member of the Elbow Lake Hospital Auxiliary. She enjoyed the neighborhood birthday club, visiting with friends and family, and the company of her cats. Being a talented cook and baker, Elvina, often sent home packages filled with love containing apple pies and chocolate chip cookies. Family was important and she made beautiful quilts for each one of them. Michael has fainting goats which Elvina loved to watch, and appreciated being able to live a lifetime in her home.

She is survived by one daughter, LaVon Jalonack of Woodbury; one son, Michael Nohre of Elbow Lake; two grandchildren, Angela Jalonack of Woodbury and Nicholas (Anita) Jalonack and their daughter, Lydia Genevieve of Maplewood; one brother, Ralph Olson of Evansville; and by numerous relatives and friends. Elvina was preceded in death by her husband, Orville on April 1, 2006; three brothers, Sidney, Willard and Baby Boy Olson; and by three sisters, Jean Hanson, Elsie and Grace Olson. To order memorial trees or send flowers to the family in memory of Elvina Nohre, please visit our flower store.