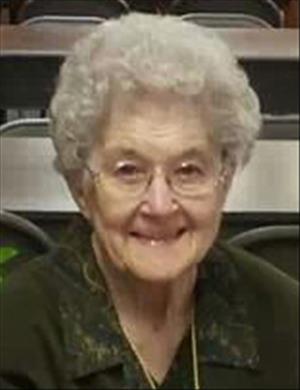 Elna Ione Nessman was born November 13, 1921, at home in Urness Township, the second of ten children born to Ole and Olida Stevenson. She was baptized and confirmed at Wennersborg Church. She graduated from the 8th grade at country school and then helped care for her younger siblings in their home. She also worked at neighboring households. During World War II, she was employed at the bakery in Morris. Elna met the love of her life, Maynard Nessman, at church. While he served in the Army, she wrote him a letter every day. One special letter told him that she would always wait for him. Maynard and Elna were married on June 1, 1946, at First Lutheran Church in Kensington. They were blessed with four children. Elna had a strong Christian faith and was very active in her church, teaching Sunday school, serving in the kitchen, and quilting with the Ladies Aid. Elna was a member of the Kensington Legion Auxiliary for 60 years. She and Maynard were 4-H leaders for many years when their children were young. They farmed north of Kensington from 1947 until the late 1990's. Elna enjoyed many hobbies including flower gardening and baking pies, lefse, cookies, and rommegrot, which she shared with many. She also had a fun cow collection in her home. Elna moved to the Good Samaritan Society in Hoffman in April, 2012. She went to live with her Heavenly Father on August 12, 2013. Elna is survived by two daughters, Mary (Bob) Kuhnau of Alexandria and Lois (Kevin) Nelson of Barrett; two sons, Steve (Sue) Nessman of Kensington and Mark (Nicky) Nessman of Osakis; four granddaughters, Teri Nessman, Annie Chan, JoAnne Kuhnau, and JoNette Kuhnau; eight grandsons, Joey Nessman, Randy Nessman, Brian Kuhnau, Chad Kuhnau, Chris Nelson, Stephan Rutten, Luke Nessman, and Noah Nessman; eight great-grandchildren, Tanner and Trevin Nessman, Milo and Oliver Nessman, Layla and Mia Nelson, and Nolan and Teagon Kuhnau-Judd; one brother, Dan (Lupe) Stevenson of Blaine and one sister-in-law, Lorraine Olson of Hoffman. She was preceded in death by her husband Maynard, her parents, five sisters, three brothers and one grandson, Derek Nelson. Blessed be her memory. Funeral: 11:00 am Saturday, August 24, 2013, First Lutheran Church, Kensington Clergy: Rev. Kathryn Rothman Visitation: 4-7pm Friday, Aug. 23, 6:30 prayer service, Erickson-Smith Funeral Home, Hoffman; one hour prior to service at church Cemetery: Wennersborg Cemetery, Kensington Funeral Home: Erickson-Smith Funeral Home, Hoffman www.EricksonSmithFH.com

6:30 prayer service; visitation resumes at church one hour prior to service.

To order memorial trees or send flowers to the family in memory of Elna Nessman, please visit our flower store.