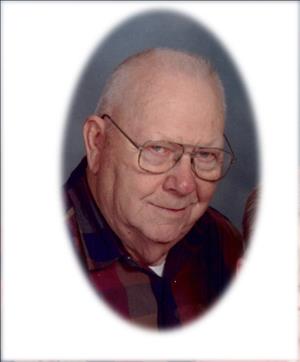 Elmer M Jesness, formerly of Wendell, died June 10, 2014 at the Douglas County Hospital in Alexandria. He was 93 years old. Elmer was born in Swan Lake Township, Stevens County, MN on March 20, 1921 to Alfred C and Clara J. (Carlson) Jesness. He was the 5th of six children. He was baptized at Scandia Lutheran Free Church and confirmed at St. Petri Lutheran Church in Cyrus. After graduating from 8th grade at country school District 40, he continued his education at what he called the "College of Hard Knocks". Elmer recorded many of his adventures in a book: Once a Trucker. In the introduction he wrote, "In my three-quarter century of life I've done a few things – I've been a farm hand, dairy helper (reluctantly), a mechanic, a welder, a salesman (very reluctantly), a carpenter, a salvage dealer, lately a writer (???) –but first of all a trucker. Once a trucker, always a trucker." Even as a teenager, Elmer had a knack for fixing things by improvising and for making "Rube Goldberg contraptions". He worked as a hired man on a neighbor's farm and also on the family farm. At age 17 he bought his first truck. A short time later he bought a truck for hauling livestock and formed the Jesness Truck Service with his brother Roy. They made numerous trips to the stockyards in South St. Paul hauling livestock, and Elmer made many other trips hauling everything from machinery to grain to eggs. After they sold their business, Elmer still had what he called "the incurable virus of truck fever." One winter (!) Elmer and his cousin decided to go to Alaska. He worked as a carpenter's helper for a man who became a life-long friend. Later his friend Elton offered him a job as a foreman of his construction crew. One house they built was for a pilot for Reeve Aleutian Airways. He told Elmer they were looking for a mechanic at their Cold Bay station. Cold Bay is about half way to the end of the island chain that forms the Aleutian Islands. Elmer became the Superintendent of Maintenance at the Cold Bay Airport and Refueling Station. He wrote about several hair-raising adventures during his time in Alaska. In 1962 Elmer moved to Wendell and got back into the trucking business. In 1964 he gave up his bachelor status and married Evie Kruger. She was the best thing to happen to Elmer up to that time in his life. Their life together smoothed away many of his rough edges. He became enthused, comfortable and dignified through their marriage. He had a real home for the first time since he left his parents' home. Their time together was too short. She passed away in 1971. During the time after her death when he felt he had hit bottom, a friend told Elmer he needed to get something going again. He bought a lot on Pomme de Terre Lake near Morris and built a house using salvage materials. Some friends called it the the RFD House – meaning Reclaimed From the Dump. Elmer wrote "…as I rebuilt the house, I rebuilt my life." Many family members and friends have happy memories of Elmer and Eileen's annual potluck picnics. Elmer got a salaried job securing easements and right-of-ways for the construction of underground telephone cable. He secured the signature of an attractive widow and then took her out to eat. Their friendship blossomed. He wrote, "I soon realized that I had met another wonderful lady, and I'd better not let her get away." In 1973 Elmer married Eileen Raymond. Twenty years after he left Alaska, Elmer took Eileen there for a vacation. Elmer fixed an old school bus into a self contained camper. He wrote, "This was my fifth trip, but the first I had a chance to relax and enjoy the scenery." They got to visit many old friends and see many changes. During their years in Wendell, Elmer was involved in the salvage business. He wrote, "I always found ways to use things we call junk." Elmer and Eileen enjoyed several trips in their camper. They also were regulars at the Wendell café. A couple years ago Elmer's health made it impossible for them to stay in their home in Wendell, so they moved to the Barrett Care Center. Elmer wrote, "As I reflect on my life, I think it was pretty interesting. I can think of a lot of things I'd do differently if I could live life over, but I probably wouldn't. If I didn't make the same mistakes, I'd find some different ones. That's how life is. If I could give some advice to some young guy (who wouldn't want it anyway), I'd tell him to be himself and not be afraid of a few hard knocks. Life is worth it." Ironically, after driving thousands and thousands of miles and having more than one close call, Elmer died as a result of an automobile accident. (He was not driving.) Survivors include his stepsons and stepdaughters and their families; sister, Ruth Tweed; several nieces and nephews; and many friends. Elmer was preceded in death by his wives, Evelyn (Evie) in 1971, and Eileen on May 22, 2014; brothers, Philip and Roy Jesness; and sisters, Lillian Stark and Dorothy Durkee. Funeral Service: 1:30 PM Wednesday, June 18, 2014, at Trinity Lutheran Church, Wendell, MN, with visitation one hour prior to services at the church Interment: Scandia West Cemetery, Stevens County, MN Clergy: Dr. Eugene Boe Condolences: EricksonSmithFH.com The Erickson-Smith Funeral Home of Elbow Lake is in charge of arrangements for Elmer Jesness.

To order memorial trees or send flowers to the family in memory of Elmer Jesness, please visit our flower store.