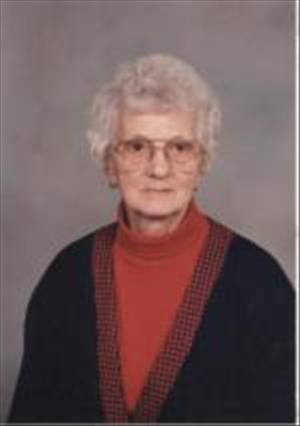 Elizabeth Huseth, 95, a resident of the Barrett Care Center, died Saturday, September 04, 2010, at the Center.

Visitation is one hour prior to the service at Church.

Elizabeth Willamena Dora was born May 27, 1915, in Delaware Township, Grant County, Minnesota, the daughter of Edward and Emma (Moeller) Biss. She was baptized and confirmed in the German Lutheran Church and attended country school in District 26, Delaware Township. As a young girl, she helped her parents on their farm and later worked for other families that needed extra help with household chores as many young girls did in those times. On June 26, 1937, she married Burnell Huseth. They spent the next 45 years farming in Lien Township and had two children, Lyle and Beverly. In 1982, they bought a house in Elbow Lake. Burnell died on June 14, 1988. In 2005, Elizabeth moved to the Crestview Manor in Evansville, where she lived for about a year before moving to the Rolling Hills Assisted Living apartments in Barrett. She became a resident of the Barrett Care Center on August 17, 2007. Elizabeth loved her family and enjoyed her grandchildren and great grandchildren very much, telling them stories of her youth. She enjoyed her flower gardens and also painted in oils, acrylics, and water colors for many years. Her paintings will be treasured by her family members. She loved taking nature walks and sitting by the campfire in the evenings. She also volunteered at the Senior Center in Elbow Lake for a number of years. She and Burnell enjoyed traveling and spent many winters in Florida. She is survived by her son Lyle (Janice) Huseth of Elbow Lake and daughter Beverly (Dennis) Jacobson of Evansville; grandsons Mark (Kari), Bruce, and Scott (Lavonne) Huseth, and Randy (Caryn) and Christopher (Trista) Jacobson; fifteen great-grand-children; and two sisters, Alice Cooper, Arizona, and Helen Oyleo, Minneapolis. She was preceded in death by her husband Burnell, sisters Edna Christopherson and Grace Linniville, brothers Walter, Herbert, Elmer, and Randall Biss, and her parents.
To order memorial trees or send flowers to the family in memory of Elizabeth Huseth, please visit our flower store.