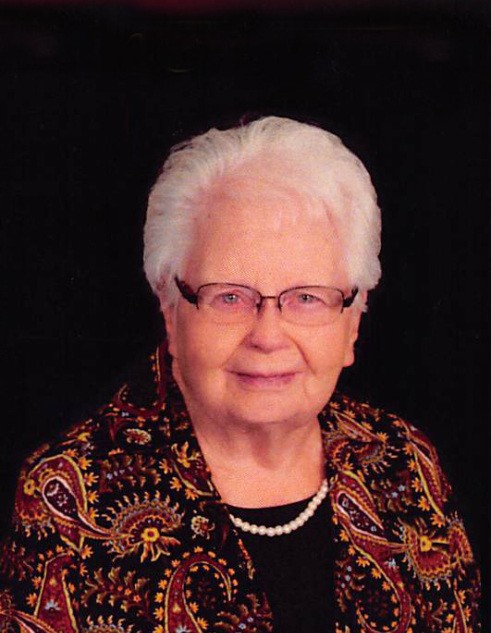 Eleanor Jane Pederson was born September 12, 1934, on a farm in rural Underwood, Minnesota, to Edward and Laura (Olson) Pederson.  She was baptized at the parsonage for Sverdrup Lutheran Church on November 10, 1934, presented by her Godmother Mrs. Eddie (Edna) Olson and sponsors Eddie Olson, Geline Pederson and Hjalmer Pederson. Eleanor was confirmed at Sverdrup Lutheran Church on May 16, 1948. She attended country school in rural Underwood District 109 (Scramstad School), District 71, and District 162 (Hollbeck School). At Hollbeck country school, she was assigned the nickname “Janey” because there was another classmate named Eleanor. Janey continued her education at Underwood High School, graduating in 1952.

As the oldest of 5 children, she was Mother’s helper with cooking, cleaning, and taking care of her younger siblings. Janey loved children and was a trusted babysitter for area families.  In 1957, Janey moved to California. She worked at North American Aviation in Los Angeles and Allstate Insurance in Sacramento, while living with the Kukkola family. In 1960, she returned to Minnesota, transferring to Allstate Insurance in Minneapolis.

Eleanor Jane married Walter Berdell Woessner on July 6, 1963, at Sverdrup Lutheran Church in Underwood. They lived on the original Woessner homestead north of Elbow Lake until 1983, when they moved to the nearby farm home of Berdell’s parents.

Janey and Berdell were grain farmers and raised chickens for several years. They had a large yard with vegetable and flower gardens, providing produce for the Elbow Lake Farmers Market. They enjoyed watching and feeding the birds. They enjoyed bowling and attending high school basketball games and other school activities. They were respected stewards of their community: active  in the Farmers Union, serving as Pomme de Terre Township officers, and as members of Christ Lutheran Church in Elbow Lake, Minnesota. Janey and Berdell also volunteered at the Grant County Food Shelf.

Janey and Berdell enjoyed traveling and sometimes took their mothers on their trips.  They made several road trips to the West Coast, visiting the Kukkola Family in Sacramento, California, and Larry, Joyce & Grant in Portland, Oregon. When passing through Montana, they would visit Niece Chandra and family. They went to Mount Rushmore, Carlsbad Caverns, Theodore Roosevelt National Park, and Washington, D.C. They flew to New York City to visit Bev and Rick Lillemoen, enjoying Central Park carriage rides and the carousel. They also enjoyed taking cruises, which Janey continued after Berdell passed.

Their great joy at Christmas time was choosing the right gift for all the nieces, nephews, and family. Many carefully crafted gifts from their wood shop appeared in butter boxes which created an opportunity for guessing the actual contents of the box and treasured memories of these wonderful gifts.

Berdell passed away May 22, 2010. Janey remained on the farm and loved the outdoors - mowing lawn, feeding birds, raising flowers, and watching the farm planting and harvest activities. Winters were spent with family in Alabama (Bev and Charlie Godel) and Florida (Chandra, Dan and Laureli.) Janey moved into an apartment at Maplewood Manor in Elbow Lake, on November 1, 2016. She received great care through her transition to assisted living and memory care. Janey’s family thanks everyone for the special care she received during those challenging times.

To order memorial trees or send flowers to the family in memory of Eleanor "Janey" Woessner, please visit our flower store.