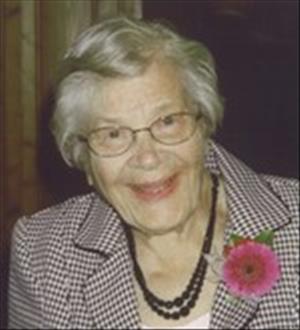 Elaine Ray, 90, died Sunday, Nov. 29, 2009, at the Dignity House, rural Hoffman. Funeral services will be held at 11:00 amo n Friday, December 4 at the Peace Lutheran Church in Barrett with Pastor Matthew Rose officiating. Burial will be in the Lincoln Lutheran Cemetery, rural Hoffman. Visitation: 5-7 pm Thursday at the Peace Lutheran Church in Barrett; one hour prior to the service on Friday at the church.

Elaine Marjorie Endreson Ray was born May 30, 1919, to Joseph and Mathilda (Leraas) Endreson in Grant County, Minnesota. She was baptized and confirmed at Immanuel Lutheran Church, Barrett. She attended several country schools during her elementary years through the eighth grade and graduated from Barrett High School with the class of 1937. Elaine attended two years of teacher's training at St. Cloud State College and then taught country school in Stevens County for several years. She was married to Dayle Ray on June 10, 1941. To this marriage, nine children were born: David, who died shortly after birth, Douglas, Timothy, Karen, Steven, Christopher, Penelope, Anthony, and Melanie, who also died shortly after birth. In 1969, they adopted Samuel and raised him as their own. Elaine loved reading and most often spent her leisure time enjoying a book. She was also a talented rosemal artist and painted many beloved pieces for famiy and friends, as well as selling them at shows. She did sewing and quilting for herself and the church and was very active in the Prairie Wind Players community theater, especially sewing costumes. She also did some acting for PWP and Playing on Purpose Productions. She loved all the pet dogs and cats who lived with her over the years, and was especially proud of her many grandchildren and great-grandchildren, attending as many of their activities and events over the years as she was able. Elaine had battled Alzheimer's Disease since about 1997, and for the past three years has been cared for by the wonderful caregivers of the Dignity House in rural Hoffman, and the Barrett Care Center. She left us to be with Jesus on November 29, 2009. Elaine is survived by her husband of 68 years, Dayle of Barrett; five sons, Douglas (Sharon) of Portland, Oregon, Tim (Kathy) of Barrett, Steven (Linda) of Monticello, Christopher (Susan) of Barrett, and Tony (Kim) of Barrett; two daughers, Karen (Leslie Alvstad) of Barrett and Penelope (Mark Johnson) of Little Canada; and two brothers, Vernon Endreson of Portland, Maine, and Harris (Avis) Endreson of Columbia Falls, Montana. Also surviving are 20 grandchildren and 25 great-grandchildren: Michael Ray, Mitchell Ray, and Matthew Folcum; Bradford (Judy) Ray and Genevive Kafka; Jonathan Alvstad and Tia Kvam, McKenzie Weidenbach, Sidney Kvam, Morgan Bitzen and Karlie Alvstad-Maack; Jennifer (Mike) McLaughlin, Alayna and Lauryn; Joel (Laura) Alvstad and Josie, Parker and Madeline; Janelle Alvstad Mattson (Neil), Nellia and Dylan; Kristina Amundson and Tayden; Eric Ray; Nathan (Tanya) Ray, Dylan and Andrew; Matthew (Gretchen) Ray, Azalea and Delia; Sarah (Quinten) Pollard, Elizabeth and Amelia; Peter Ray; Kaitlin, Anna, Alexander, and Eleanor Johnson; Brian Hauglie, Aaron and Adam Ray, Grace and Lucy Bertrand; Erica Rykman and Alexia. She was preceded in death by her parents Joseph and Mathilda Endreson and parents-in-law Clarence and Rose Ray; two brothers, Norlin (infant) and Loel Endreson; two infant children, David and Melanie Ray and son Samuel Ray; and grandsons Phillip Ray, Jason Ray, and Bradley Hauglie. Music for the service will be provided by Orlo Thompson, Krista Clemments Orlan, and Brad Ray. Ten of Elaine's grandsons will serve as active and honorary pallbearers. Remembrances will be given by family members. Memorials preferred to Prairie Wind Players or The Little Red Stocking Campaign of the Children's Home Society of Minnesota.
To order memorial trees or send flowers to the family in memory of Elaine Ray, please visit our flower store.