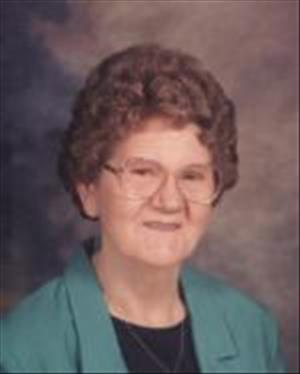 Edna Lorraine Retzlaff Nordin, 85, Hoffman, died Friday, November 12, 2010, at Prairie Ridge Hospital & Health Services in Elbow Lake. Funeral services will be held at 11:00 am Wednesday, November 17, 2010, at Messiah Lutheran Church in Hoffman with the Rev. Nathan Thompson officiating. Burial will be in the Emmanuel Cemetery, Swan Lake Township, Morris. Visitation will be held from 5-7 pm on Tuesday at the Erickson-Smith Funeral Home in Hoffman and will resume at the church one hour before the service on Wednesday.

Edna was born September 6, 1925, to Ernest and Olivia (Thornberg) Erickson in Barrett, Minnesota. She was baptized and confirmed at the Fridhem Lutheran Church and graduated from Barrett High School. Following graduation, she worked for a short time at Sears & Roebuck in Minneapolis.

On May 28, 1945, Edna was united in marriage to Walter Retzlaff. Together they farmed for 30 years. During that time, Edna worked at the dry cleaners in Morris. She was a member of the Emmanuel Lutheran Church in Swan Lake Township where she was Sunday School Superintendent, organist, and a member of the Ladies Aid. In 1975, they moved to Hoffman. Edna became a member of Messiah Lutheran Church. She worked at the Hoffman Care Center and continued to enjoy gardening, flowers, quilting, baking, and spending time with her granddaughters. She was married for a short time to Lester Nordin. Edna had most recently been a resident at the Johnson's Homes Plus near Barrett where she received wonderful care.