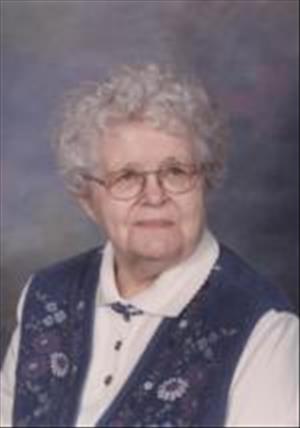 Edith Bartholomew, 92, of Alexandria (formerly of Barrett) died Wednesday, September 15, 2010, at the Bethany Home of Alexandria. Funeral services will be held at 2:00 pm Sunday, September 19, 2010, at Peace Lutheran Church in Barrett with the Rev. Matthew Rose officiating. Burial will be in Immanuel Lutheran Cemetery, rural Barrett. Visitation will be one hour before the service at church.

On September 20, 1939, Edith married Willis M. Bartholomew. For the next seven years, the couple farmed in Douglas County before moving to Grant County in 1946, where they farmed near Barrett. They retired from farming in 1968 and moved to a home north of Barrett. After Willis passed away in November 1996, Edith moved to Alexandria where she lived at Viking Towers. In February 2008, she moved to the Clearwater Suites of Alexandria. Edith had just become a resident at Bethany Home in August, where she passed away on Wednesday, September 15, 2010.

Edith was a member of the Lien and Peace Lutheran Churches where she was active in the ladies aid. She enjoyed gardening, preserving vegetables and fruits, crafts, quilting, making corn husk dolls, painting, and making artificial floral arrangements. Edith liked to make something out of nothing. Her specialty was baking chocolate cake. She made many friends and particularly enjoyed spending time with her family and friends. It is said that her friends at Clearwater Suites wanted to, "bottle up her laughter."

Edith was preceded in death by her parents, her husband, two sons, Roger and Leonard, and one daughter, Ruth Ann.
To order memorial trees or send flowers to the family in memory of Edith Bartholomew, please visit our flower store.